This weekend Wycombe Air Park was taken over by Armed Forces Day but Bicester very kindly offered us hospitality. Saturday was hot enough to melt fibreglass but today four of our members braved the wind and wave for some enjoyable flying. The task was Ely-Bottesford-BC1. Denis got round, Steve and Nils nearly made it, and Hakan had a good time more locally.


We will be back to normal ops this week - until the Regionals start on 13th July.

So we come to the final day (summer solstice)  for the Klippeneck 2019 expedition.  We have flown every single day we have been here and amassed a lot of airborne hours and kilometres flown.

The forecast was similar to yesterday but with a little less chance of the very heavy storms early in the day. The Duo Discus, K21, 944, NVM and HA all flew before the forecast rain and good flights were had by all.

315 needed a bit of TLC before it could fly due to a punctured tail wheel but this was soon fixed and took to the skies.

Everyone planned to land in sufficient time to derig before the rain and with the exception of 316 this was achieved.

As seems to be tradition, a final meal was had at the "halfway house" and the concensus of all concerned was that it has been a another great success.

Thanks must go to Richard for organising the expedition and making it such fun and to the members of Klippeneck gliding clubs who have hosted us and made the flying possible. It wouldn't happen without their support. Bring on the 2020 summer expedition.

The run of great weather had to end eventually and overnight there had been very heavy rain and the forecast for today suggested large development of thunderstorms from midday onwards.

The cloud base was about 1,800ft above site so a plan was made for some launching before the rain arrived.

Dinner was an early affair and a plan was hatched by some to for some Go Karting setting off at 9 pm.

Another good forecast from our resident met man Nils promising good climbs to 8,000ft but the risk of towering cumulus to 30,000ft later in the day with associated rain and the best area to the east on the Alb. Its uncanny how accurate he is! 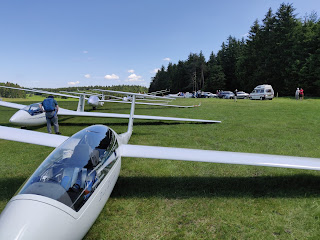 As the day progressed there was significant cloud development over the Black Forest and very heavy rain which then spread along the northern edge of the Alb forming a barrier for several of the pilots coming back from the east.

Ashley in 944 had to fly through a significant area of rain returning from the south eastern corner of the Stuttgart zone, sufficient to wash his yaw string off but everyone got back safely and another pleasant evening eating down in town finished off the day.

A glorious day if interspersed with one or two tricky patches. A mostly easterly airflow and 6,000ft bases forecast.

All the gliders from Booker were out and flown along with an number of locals and another visiting club from FSV Sindelfingen, they have brought two 2 seaters and a number of club single seaters. What is very refreshing is to see how many youngsters they have brought along and the enthusiasm they have to get their gliders ready, fly and then clean and polish before putting them away.


Honours go to Denis in 370 who flew along the Black Forest before flying around the Stuttgart zone doing 400k. His comment on OLC of "Tricky in the north west corner" could be translated to "It wasn't very good at 800ft" 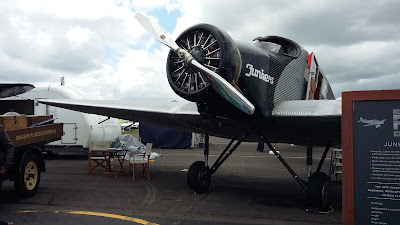 Overnight there had been some heavy thunderstorms and torrential rain and we woke up engulfed in cloud but it had stopped raining.
The met forecast suggested it would be flyable early afternoon so some folk went off sightseeing but the newer arrivals stayed on site ready to fly when it became good enough.

Initially the cloud base rose (from the ground) but there was a layer of top cover and a clearance coming from the Black Forest but still with some towering cumulus but as the pictures that follow show it then developed into a stunning evening and stayed soarable for at least an hour after we had finished for the evening.


And dinner was deconstructed shepherd's pie, carrots and cauliflower cheese 👌
Posted by Doug Hilton at 06:18 No comments:

Change over day so some folks going home 😢 and several new faces joining 😁. Again the day started with a lot of top cover but with the promise of better conditions in the afternoon.
Gliders were rigged and taken to the launch point.

Whilst it became soarable, the cloudbase didn't really get much above 5,000feet which is fine except the site is at 3,000feet.


Most flying was done locally, however 370 driven by Denis flew to the Black Forest before flying the southern edge of the Stuttgart control zone and back for 260 Km.