We at Booker are never bothered by convention - or calendars - so now the gang is back from Klippeneck we will be celebrating the Longest Day on Saturday 12 July. There will be plenty of entertainment - and food - from 5am until dark. All are welcome, bring your family and friends. 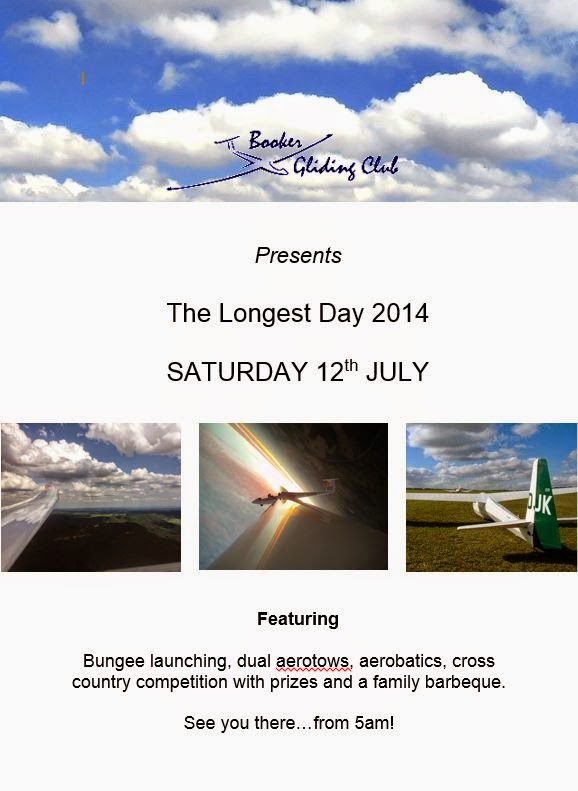 Young MiniGat is back from university and competing in the Shenington Regionals. Today he achieved a second day win and is leading the field overall.

Finally some more news from Richard in Germany - they are having far too much fun out there!
******
Sorry I've not been in touch for a few days, we’ve been flying cross country every day, I’m hoping for a day off but I’m not sure we’re going to get one!
There’s too much to talk about!! Since my last updates we’ve been flying numerous tasks ranging from 200km to 750 km with no task being flow slower than 80 kph.
Congratulations go to Simon Vardigans on his Diamond Goal and Gold Distance.
We’ve also been winch launching (315 goes up the wire rather well!).
Today the weather doesn’t look amazing but there’s still a good few hours of usable thermals. We’ve got a couple of check flights for newcomers and them back to winch launching!
All I can say is, you need to be here next year, Klippeneck is awesome!!!!!!! 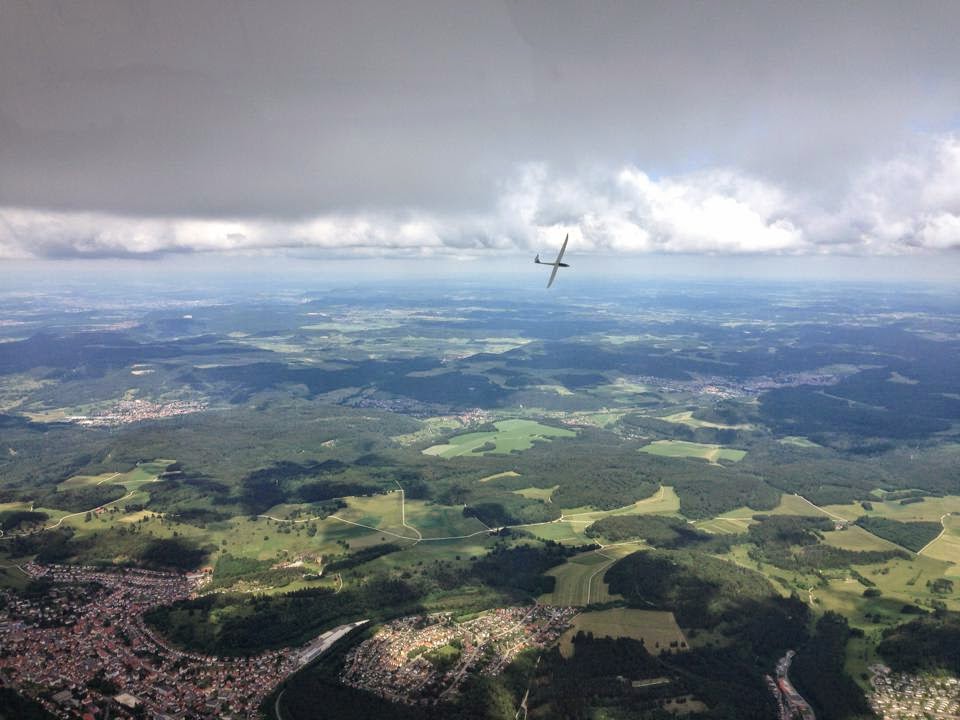 No need for superstition, the weather was - after a late start - excellent for a few hours, long enough for Richard Eaton to go to Enstone for his Silver distance. It was so good he didn't bother landing but flew all the way back as well, which was unfortunate as he hadn't declared the task and so he can't claim it for the badge. If only he'd landed! Ah well, at least he knows the way for the next attempt. Richard also flies power, he is enjoying finding out about alternative sources of energy.

Can you see what it is yet? 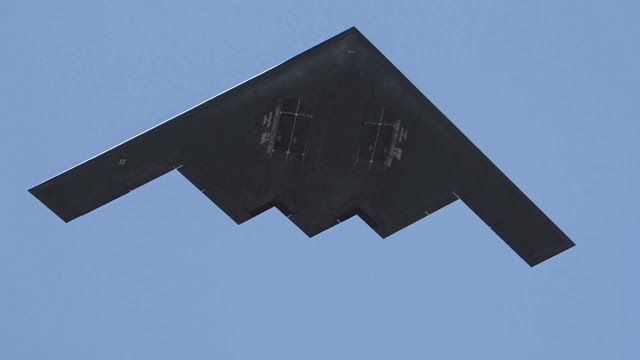 Apparently the US have stationed two B2 Spirit stealth bombers at Fairford to show Vlad who is boss. I hope it doesn't backfire!
Posted by jimboffin at 11:29 No comments:

As well as the great flying going on at Klipenheck, Booker has also had a bumper day.

500's by J1M, 325 and 279 (Bob Smith completing his final Diamond) on a good but not classic day. Bob was on task for nearly 8 hours but shows what can be achieved with a bit of preparation and a lot of determination. Congratulations to him and his achievement. 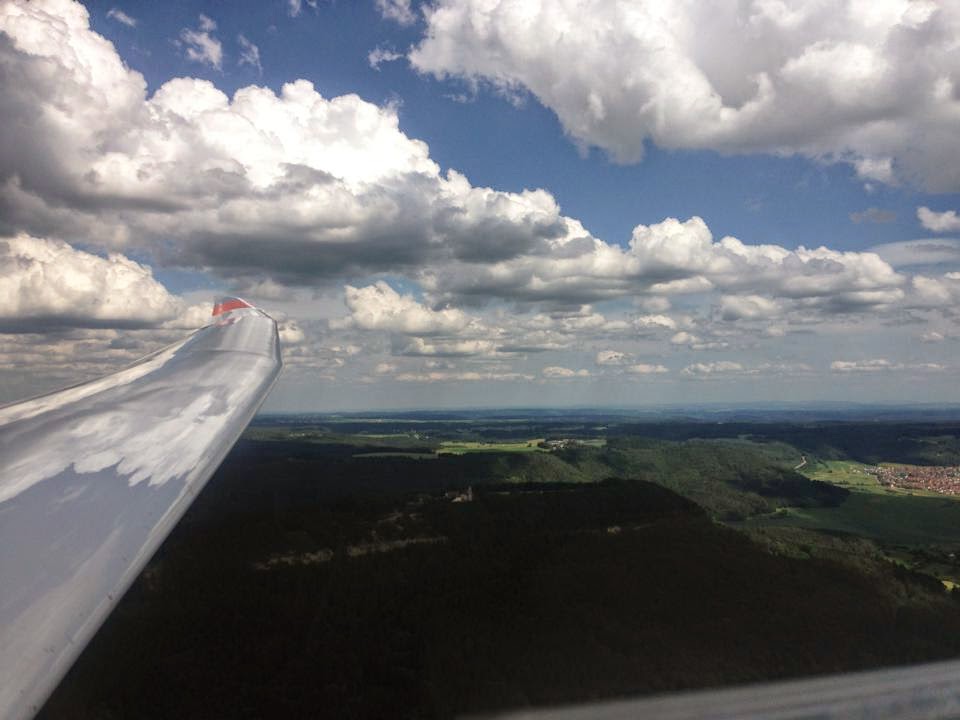 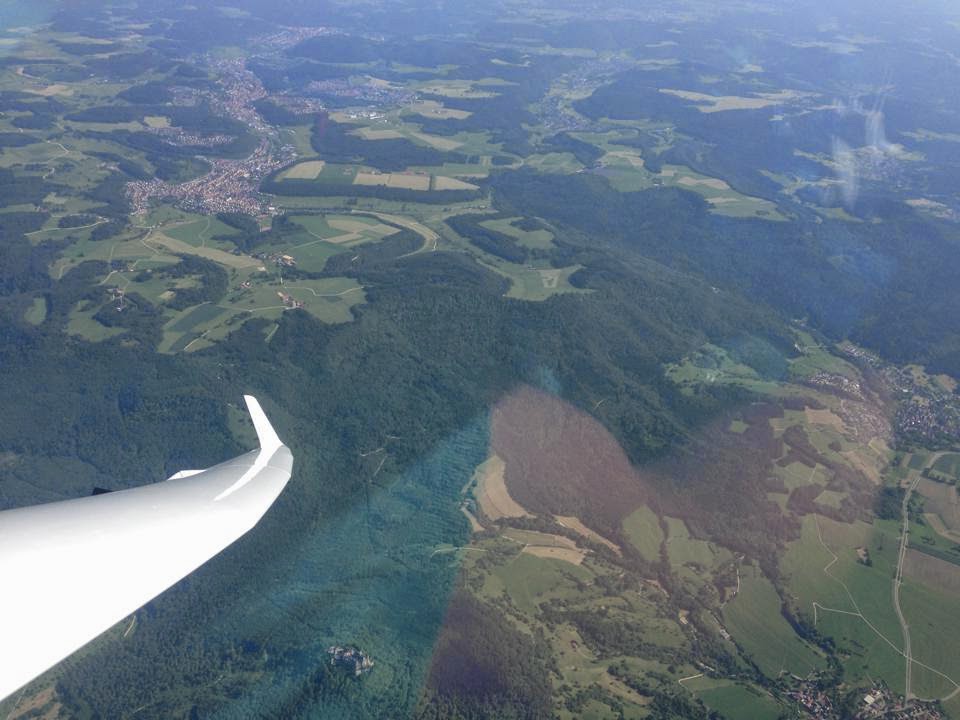 Yesterday evening the rain finally made it here in the form of a huge thunderstorm. The rain was extremely heavy and the thunder and lightning drew us all outside to watch the spectacular light show. 315 and 370 managed to just beat the rain, landing only a few minutes before it started. The de-rig of 370 became rather entertaining, especially after a lightning bolt hit the ground a few hundred metres from us! 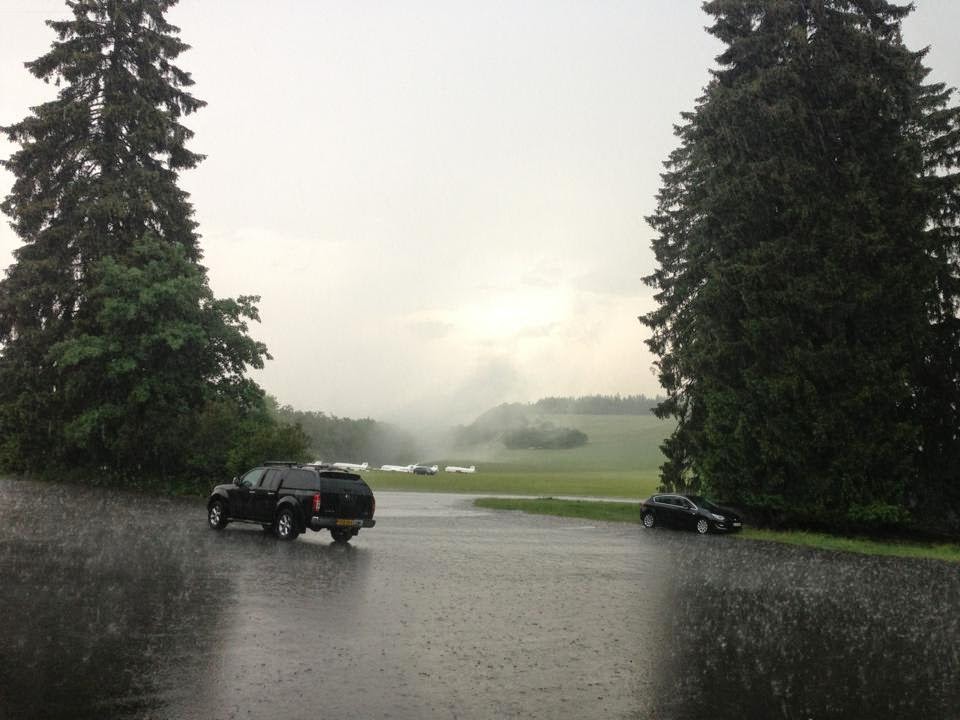 Z3 (Tim Scott) and RM (Rob Munro) did a lead and follow to the Black Forest achieving 200km at 100.8kph. The day before Tim flew his fastest task ever with 142 km at 137kph – I'm sad to report that FI could only manage 120kph – Tim says I got lost but I’d call it a mix up of turn points!
John Herman and Steve Williams took a break from flying yesterday and went to the Schempp-Hirth factory to stock up on parts – most of which they were given for free! Gift of the plumbers gab!! 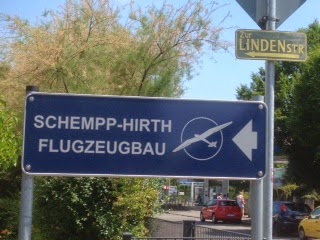 Food wise, we have an excellent restaurant next to the airfield with spectacular views. We’ve also been investigating other restaurants in the local towns and I’m pleased to say we haven’t been disappointed! 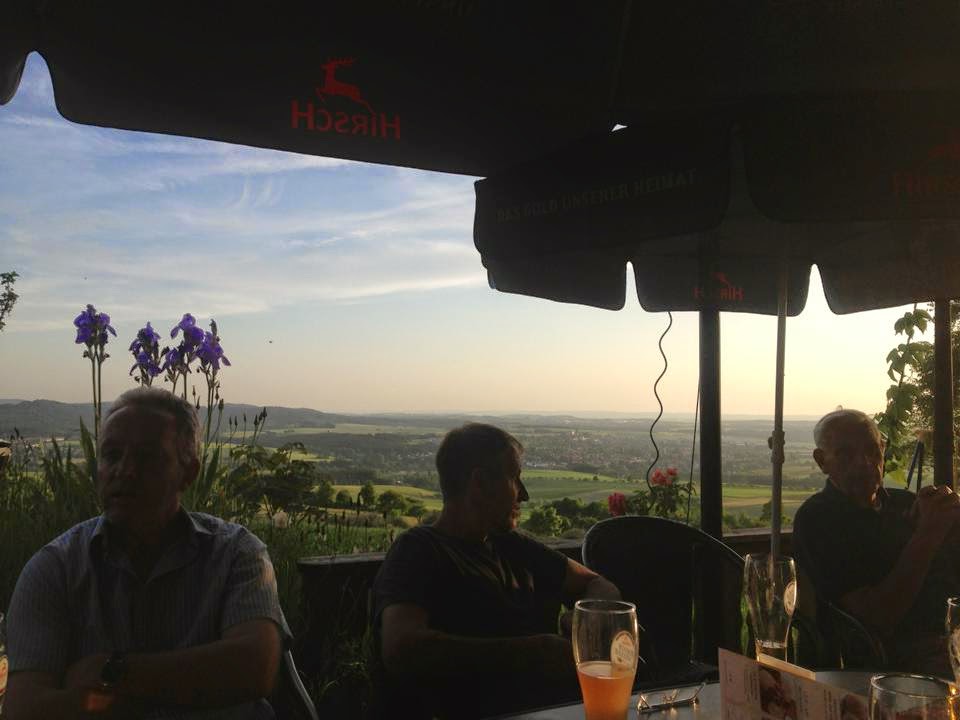 The airfield accommodation is fantastic and is highly recommended!
The only downside is the heat, it's permanently hot! During the day it's usually around 32 degrees, dropping to 25-28 degrees overnight.........
Richard also took this picture of sheep, not sure quite what part they are playing in the expedition. 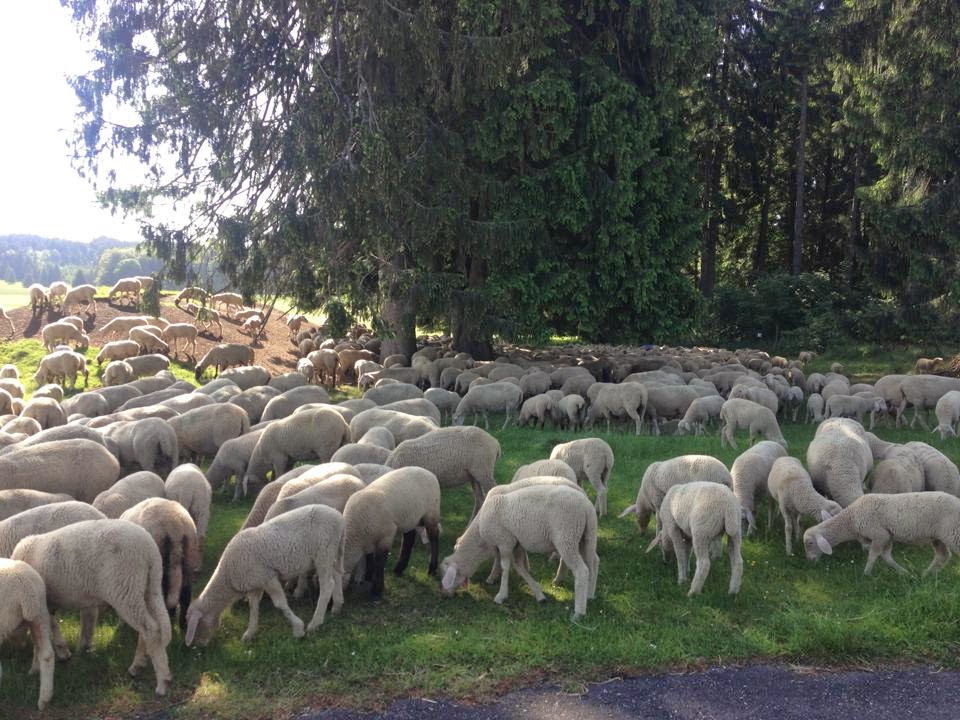 The expedition to Klippeneck  in Germany is now underway, and the following brief report from CFI Richard suggests that they are having a whale of a time: 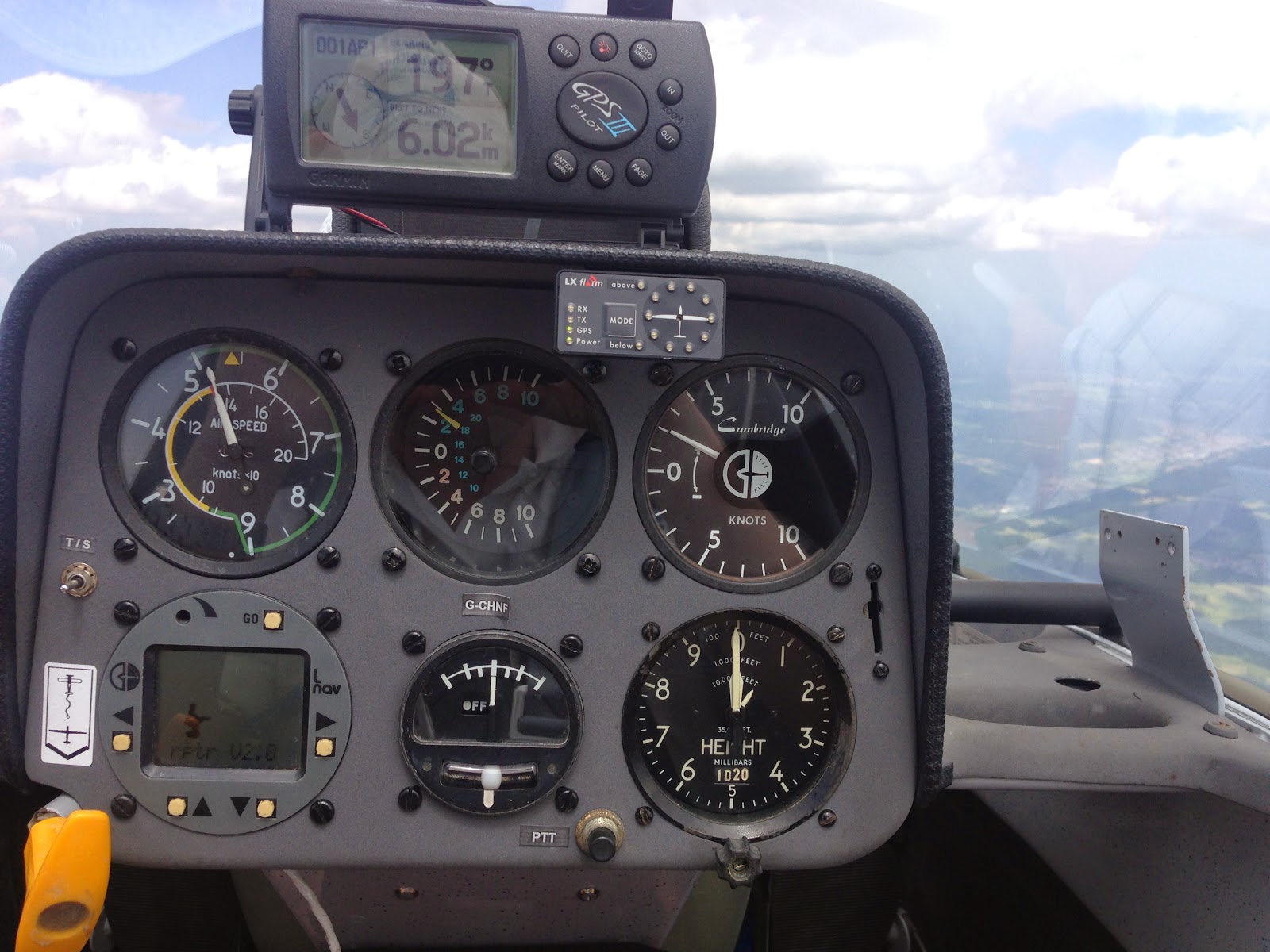 The Marketing team spent the morning in the clubhouse drinking tea as the rain poured down - going to a summer show didn't seem like such a good idea. However, by around 11am it has reduced to light drizzle so we decided to go and join in the fun. The other stallholders, bouncy castles and carousels were already setting up so we got on with rigging HNK and putting up our display materials. And then the sun shone and the visitors arrived and we had a constant stream of children  and adults keen to see a glider up close, since they see them overhead their homes all the time.

After a damp start the day turned out really well, the Show was a great success with a variety of attractions including bowls, a dog show, a dance display by an army of tiny tots clutching teddy bears
and of course a raffle, one of the prizes being a glider flight. As well as selling some trial lessons, our participation was also an opportunity to contribute to our local community.

Many thanks to the team: Chris, Hedda, William, David H, Hugh, George and Josh.
Posted by Jane at 22:36 No comments:

Faithful readers will remember that David Humphreys won our local Easter Egg Aerobatics comp a few weeks ago (no, not actually at Easter), here he is receiving the trophy from Richard. 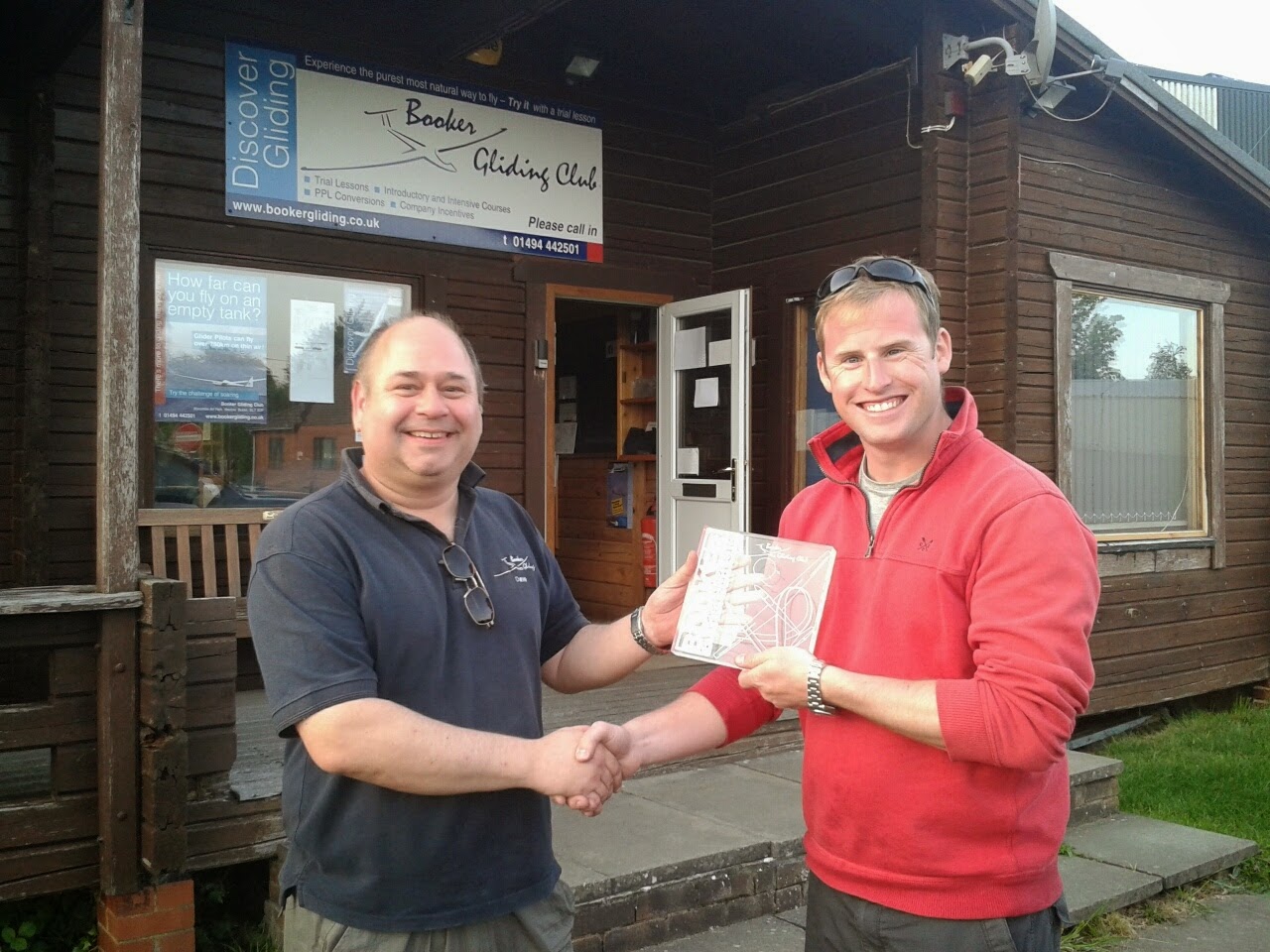 David has follows this up by winning Bronze in the Standard Class of the British Glider National Aerobatics comp at Saltby this weekend, an excellent result for a first time entry.

In other news, another of our fantastic cadets went solo today - Hugh Cherkas - congratulations Hugh.
Posted by Jane at 22:20 1 comment: