It was all hands on deck on Thursday for a visit from Andy Perkins of the Air League with a group from British Airways work experience programme. With a slick ground operation and fast turnrounds we accomplished 64 flights - 56 aerotows and the rest in the Falke. The group had a great time, lots of grins, as the pics demonstrate. 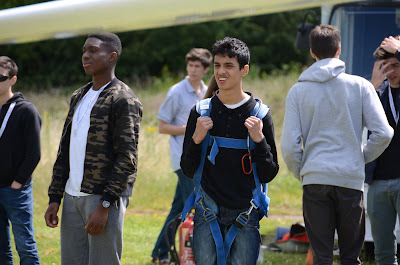 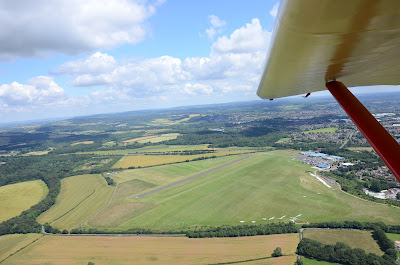 We were very lucky this week, not only with the weather but also in having Nils and Tim on the case setting tasks which made the very best of the windows of opportunity available and enabling competitors to enjoy their week. The weather ran out on Friday but we had 6 contest days. On Sunday Nils struggled hard to find a final gap in the clouds but in the end we moved to the clubhouse for champagne and prize giving.

Richard began by thanking our generous sponsors - Hayward Aviation, NavBoys and Sailplane & Gliding - who had provided so many prizes that there were enough to go to 8th place. The results were as follows:


And last but by no means least, the Good Spirit award was given to Ashley Birkbeck for carrying on despite unwelcoming landouts and other misfortunes, he received a copy of G Dale's book.

Richard also thanked all the members who worked hard to make the comp such a success:

Jim White then thanked Richard for his hard work as Comp Director.

Roll on next year!

The run of good weather is continuing and yet again Nils the Met Man and Tim the Task Setter got a task out of a small window of good conditions. Tim came first (flying HC) with Nils a fraction slower. John Otty came second and Geoff Lyons third.

The K21s were out again, this time Andy Monk in 316 managed 6th place with Alex O'Keefe in KCZ coming 8th.

The overall winner at this stage is Jim White, with George Hunter second and Denis Campbell third, but there is still time for this to change.

The weather gods are on our side, we had another day of sunshine, and this time a real racing day. The task was 145km to make the most of the day before the warm front arrived, and competitors were back almost before the kettle had boiled for tea. Star of the day was KCZ, a K21 flown by Alex O'Keefe, with David Hamilton as crew, which came in first, closely followed by Task Setter Tim Scott in his ASW27. However, both were flying HC so the real winners were:

Jim is still in the lead overall but George and Denis are hot on his heels.

It looked OK at Booker but it seems that conditions weren't so hot down track. The task was a 300km double shuffle to Northampton, and  a few people cut the task short or landed out, but some got back and we have winners.

Task Setter Tim launched the grid and then went and took his covers off, took a launch and won the day with a speed of 80.6kph. He was flying hors concours though, so the podium places go to:

Follow the action on Soaring Spot and on Spot the Gliders.

A difficult day for task setting but our excellent Comp team got a day out of a very small weather window. With a lowering cloudbase and strengthening wind, some competitors chose to land back and go for tea, but a handful pushed on with the 104km task. Once again the Handicapped Distance Task format proved a winner. George A9 came first in a Ventus (he landed out at his workplace, Zulu Glasstek, let's hope he hadn't called in sick), Denis 370 was second in a Ventus 2cxt and Alex and Hamid third in..........KCZ, a K21. As they were flying HC, third place in fact goes to Nils EN in an LS4.

Well done everyone, full marks for effort.
Posted by Jane at 22:49 No comments:

Sunday dawned bright and sunny, with a mere light breeze compared with yesterday's gale, and it looked promising for a racing task. The grid launched at 11.30 on Task A, 218k round Wantage, Olney and Didcot, with a few control points thrown in. Speeds were not high - the winner said it was 'awful' but most people got back.

Andy Monk and cadet Michael Otty deserve a special mention for getting round the task in a K21, in 11th place, 2 places behind Michael's dad John in his ASG29. Fantastic result!

As to the podium places, Jim has an ASW27, Martin (a visitor from Sutton Bank) flies a Pegase 90 and Nils has an LS4.

This clearly demonstrates the value of the Handicapped Distance Task format, which allows everyone to have fun flying gliders with a range of handicaps.

Our wonderful British weather has not been kind to gliding comps so far this year, but our Met Man Nils and Task Setter Tim got us a day out of some interesting conditions.

The day started with briefing in the Army Reserve centre which offers excellent facilities. Director Richard welcomed all the competitors, crew and helpers, and acknowledged the generosity of the comp's sponsors, Hayward Aviation Ltd, who have provided impressive goody bags and the day prizes.

The task set was a double out and return to Wantage, to make the best of a windy day with the usual collection of showers blowing through. The launch was at 1330 and several people took relights, but timing proved to be crucial as the Task Setter threw on his wings and launched well after the grid, and won the day with an impressive speed of 126.5kph. Hor Concours though so provisional places went to:

There were some landouts but retrieves were soon underway, and meanwhile back in the club house the beer was very welcome.