Doctor Who fans look away

After last weeks days of low mist and fog, the weather has cleared each afternoon to be flyable and Friday has been particularly clear if somewhat breezy. This has enabled a fair amount of two seater training to take place plus several solo flights. The forecast for the weekend is good, so no excuses for not being there!
A reminder that there will be a meeting from 10.00 am in the Clubhouse this Sunday 27th to discuss our operations during the period of the 2012 Olympic Airspace Restrictions. Your input will be very welcome.
Other activities on the airfield included the fabulous noise from the Yak 11's radial engine as it was doing some high speed runs down the runway - hopefully it will be flying soon. 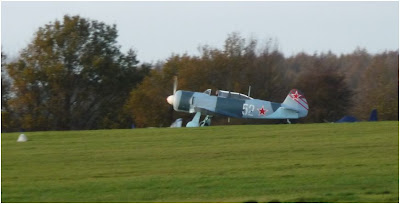 The other slightly unusual activity was the sight of Doctor Who's Tardis flying around the north western end of the airfield - fortunately it was not being flown underneath a New Zealand helicopter delivering Christmas trees so we should be safe from the Daleks for a while yet. 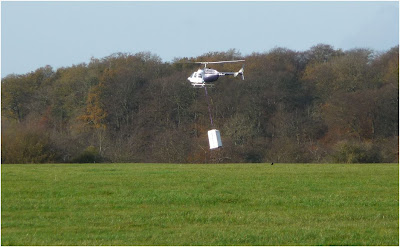 After a few days of very depressing low cloud and mist, the cold front went through around midday today and presented us with an excellent sky and visibility for the afternoon. Flights were taken by a couple of members in the K18 with the rest of the flying being taken by members on Basic and Intro courses. For a short period there were a couple of streets evident and one flight in the K21 managed 30 minutes soaring in the reduced sink that could be found under the cumulus - excellent considering the time of year and the fact that it was unflyable until 13:00. 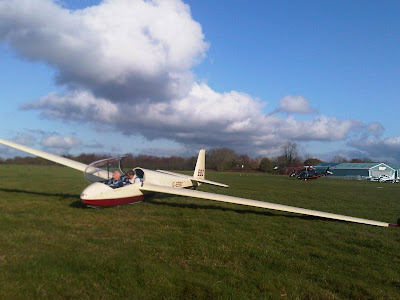 John Herman with one of his students preparing to launch under a good looking sky
One note of caution for anyone flying with the low sun and low temperatures (especially on 24) is to ensure that canopies are spotlessly clean (as they should always be!) as visibility into sun is not always what it could be.
Posted by Doug Hilton at 19:36 No comments:

To infinity and beyond!

Well, it was a bloody long way to Aerospool in Slovakia and back. I took a leisurely 3 days to go down through France, Belgium, Holland, Germany, and Austria -1122 miles from Booker. Despite that I managed to get nicked by German Hitler Yoof Politzei for overtaking a lorry where I should not have and then got stopped again in Slovakia for being foreign.

Aerospool are an interesting company, very friendly and very busy. In addition to refinishing gliders they are completing gliders for Schempp Hirth for which they have the agency, building parts such as tailplanes for SH, and build nearly 500 Dynamics / year (The Dynamic is a very nicely designed and built Rotax powered ultralight which can aerotow two seaters and cruise at 250KPH).

They have a nice airfield with a flying club just W of the Tatra mountains and say that the soaring in March and April is very good. We have an invite for an expedition!

The highlight of the tour was however the German motorised toilet. So good in fact that I had to bring you home a video!

Posted by jimboffin at 09:29 No comments: 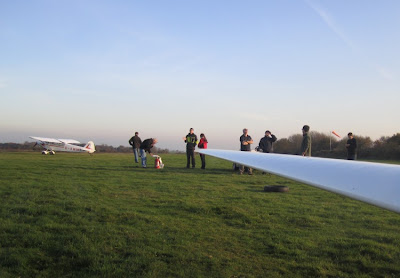 More warm November sunshine today - our hardier members were in T shirts - and plenty of flying, with a mix of trial lessons, course flying and members just having fun. With Graham around this of course included aerobatics, one of the K13s did most of one downwind leg looping. 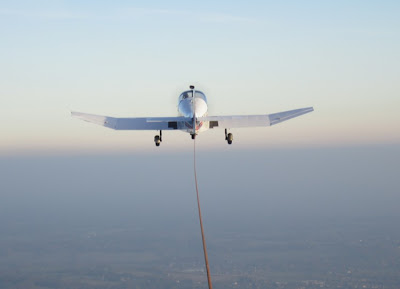 The low inversion made horizontal visibility a bit murky..... 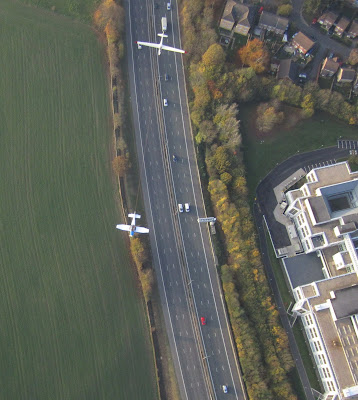 Bob Smith went for a flight in order to take some photos for his forthcoming FOG (Fundamentals of Gliding) briefing which will include tips on cable break options. Come along on Saturday 26 November at 0930 for a discussion on the fields shown below. Better still, come at 0845 and help unpack the hangar first. 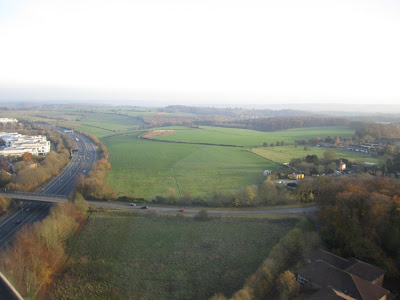 Before anyone thinks we have lost the plot, Booker is still first and foremost a Gliding Club, however every now and again there is the need to do some necessary husbandry around the launch point and airfield boundaries. 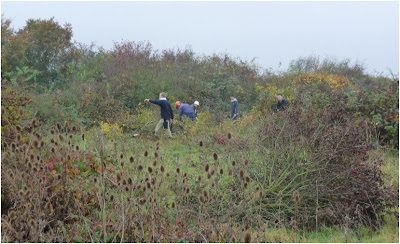 There was an incredible turnout of members complete with a wide variety of loppers, chain saws and parangs who under Will Ellis' direction set about clearing part of the boundary on the south west corner of the airfield and a massive cleanup around the launch point and trailer park. It was very refreshing to see so many willing workers who stuck with it all day. 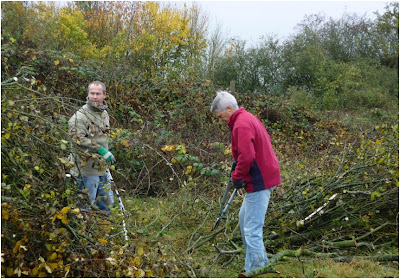 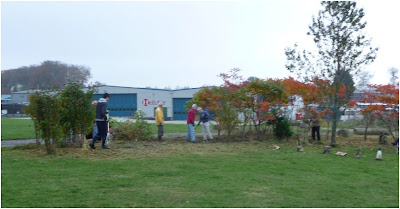 An impromptu barbecue was provided by Marnie and Dave Humprey to feed the masses for lunch which was extremely well received. Be warned there are more 'work parties' planned as there is still lots more to do but the effort is well worth it for the benefits you will get - please be willing to do your bit - notices will be put up and sent out for further dates. 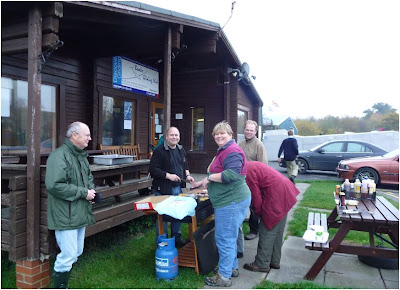 A BIG thank you to all those who turned up and helped out, it is really appreciated.
With regard to flying, there is still plenty of activity weather permitting - the Aerobatics weekends are running as well as more general training, soaring and other activities planned.
Posted by Doug Hilton at 08:05 No comments: