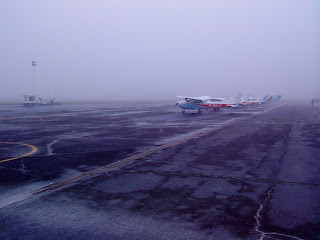 The end of the apron remained out of sight until after noon
9am Monday morning at Booker and it was fogged in solid.  Martin remained positive and offered one of our intensive students some theory tuition if the weather failed to improve.  Craig arrived late morning and learnt a good deal from Martin's blackboard session.  Their combined determination forced the fog to clear at 12:30, leaving a clear sky and giving us the opportunity to get the aircraft out of the hangars.  Three people flew for a total of six launches.  A reminder that winter offers plenty of good weather for students wanting to progress and pundits wanting to keep current. 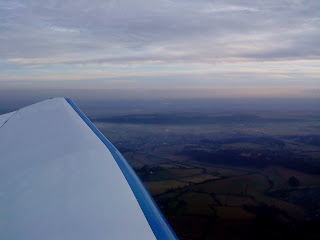