Thursday 16 July looked like it might be a good gliding day over a good part of England, so perhaps a chance to do the boring Gainsborough Bullington 500K again (Not done it for a couple of years). On the morning sat24 showed the reality was slightly different with a mass of cyclonic cloud covering an area from the Wash down to the South coast with a tendency to move westwards. So rapid change to lets go towards the West Country. Eventually deciding on a Booker Bridge- Fordingbridge- Axeminster- Stockbridge-Booker. 373k.

Almost ready to go and Jim asked if I’d got a passenger in mind, and to the answer “no” said well I know someone that would like to come I’ve given Bill your mobile number. Before we took off I had suggested to Bill that a landout was always possible to which he replied “It’s all part of the fun”.

The run to just short of Axeminster was great and views of the coast around Portland Bill, Sidmouth and Lyme Regis were well worth seeing. Unfortunately Bill’s camera had lost battery power so only our eyes and those of Doug, and Richard have captured them, and as we have no USB port in our heads that is where they remain.

The gamble came as we climbed very slowly over Axeminster that a cloud over Bridport looked good so I decided to go for it. Silly me it didn’t work and we were looking for fields. They are quite small in that area although I had spotted 2 fields that would do when Bill said “That looks like an airfield over there” . That was it then so after a few bubbles made us thing we could get away it wasn’t to be. The decision to land being taken we then waited to see if the model about to take off would or not, so when it taxied back to it’s owner in we went.

We were made to feel most welcome by the members of the model club especially Howard (who had been the one about to launch) He explained the field was used by the model club and a few micro lights but we were the first glider to land there. Amazingly the model club rent the field for use all year for peanuts. As micro lights also operate from there know to keeps there eyes peeled.

Here is the site from a Google earth screen dump:- 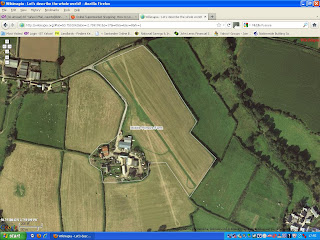 The time being just 14:26 it was difficult to get hold of anyone at Booker (they were all still flying) and my phone contacts was woefully short of names. Nevertheless thanks to Graham I was able to get hold of Heggie and then Glyn who eventually managed to organise a retrieve from a choice a people and Geoff Lyons was the stalwart who did the deed. Many thanks must go to Geoff, who having rigged, flown Devizes-Olney and then derigged spent over 7 hours driving. The sight of the trailer driving down the A35 in Bridport at 9oclock in the evening put new life into Bill and I.

Geoff did have a camera that was working and took the following whilst Bill and I were organising the Duo for the trailer. 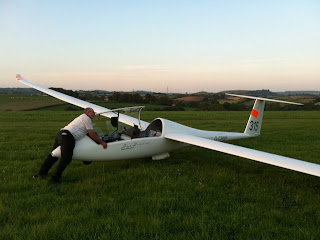 How else can one turn it without a tail dolly? 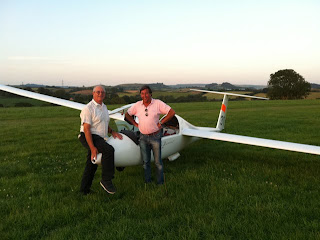 A smile before the heavy lifting.

Thanks again to Bill for his cheerful acceptance of the day and to Geoff for an absolute sterling performance on the retrieve.