For several years now, Booker has hosted the Annual Easter Egg Aerobatics Competition. Part of the tradition seems to be that, due to inclement weather, it's not actually held at Easter and is delayed until the folowing weekend. This year, Graham Saw tricked the weather by holding the competition the weekend after Easter. This ruse worked because we had a cloudbase of 3,000'+ with a high level overcast layer kiling off much of the thermal activity in the early part of the day. Whilst enthusing about thermals being damped down is anathma to soaring pilots, to those doing aerobatics it's a real bonus as it makes the sortie smoother and safer (no sudden gust loads experienced due to those pesky 5kt thermals getting in the way!). And so it was that conditions were pretty ideal.

Graham arrived early to ensure the K-21 was cleaned out (loose objects, dust & lumps of mud are not a good idea when you're doing aerobatics!) and took the glider out to the launchpoint in readiness for the day. I was asked to judge the competition and entered into the spirit of things by enjoying a relaxing coffee and chat in the clubhouse whilst everyone else was outside in the cold getting the kit ready. Such was the banter in the clubhouse that I nearly stuck around to listen to Jim White's X-C Performance lecture before twigging that I really ought to see if there was anyone at the launchpoint.

So, glider prepped with requisite sighting traingle attached to the wing (always makes it look like you're serious if you have a traingle on the wing), we started slowly with the more enthusiastic volunteering early on. Showing the seriousness with which the competitors took the contest, several were seen walking through the sequence whilst on the ground. For everybody else this provided some great entertainment as we watched Sarah and Jane run through their sequences. A picture paints a thousand words as they say... 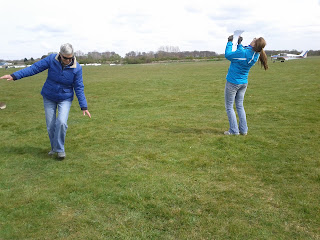 As the day went on the enthusiasm grew and with seven pilots taking part, most of whom did two flights, attempting either the "beginner" or "Tricky" sequences it became quite busy. All pilots showed considerable enthusiasm and quickly gained insights into competition tactics (most important one being - be nice to the judge). All flying was conducted to a very high level of competence and safety (with Graham acting as safety pilot where needed).

As the day drew to a close we finished the final few sequences, and after the last flight Graham totted up the scores (understanding the aerobatic scoring system is an art in itself). Once the kit was away, Graham announced the results back at the clubhouse:

These are an excellent set of results and congratulations are deserved by everybody who took part. Jane & Chris were awarded the competition trophy (which Chris made the previous year!) and everybody received customary Easter Eggs as prizes! 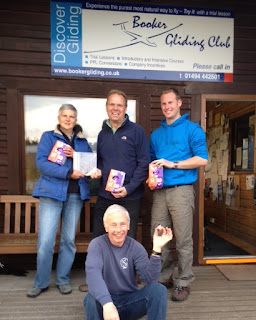