An interesting mix of weather after the previous weekends glorious xc weather. Lots of wind and (more rain) on Monday and Tuesday but this didn't stop all flying. Wednesday was glorious with strong thermals to over 4,000 ft and the rest of the weak provided lots of opportunity to practice thermalling in weak lift - guaranteed to improve your climbing when it gets good.

We had a number of first solo's - initially Martin Emery (one of our new seasonal tug pilots - so say hello to him) who was checked out in the Super Cub and then later in the week Duncan Sharp and Zeljko Livancic who have been on basic courses (with top ups) and then on Friday, Chris Burns who has been doing a PPL to solo conversion course. All 3 have indicated that they intend to carry on so look out for them around the launch point. 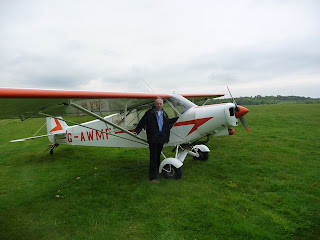 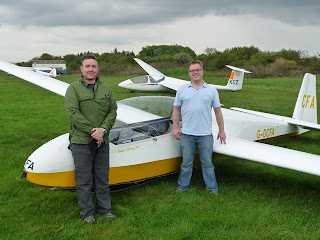 Duncan Sharp and Chris Burns shortly after soloing in CFA

Saturday was a misty, low cloud day which didn't stop our flying and gave a chance to spot some of the Queens Diamond Jubilee Flypast aircraft on there way back to various bases after overflying Windsor Castle. Booker was 'bracketed' to the south by a couple low level C-130's and 12 helicopters and to the north by a VC 10 with a pair of Tornado's in tow. 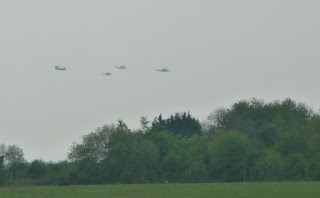 Our competition weather man has already predicted that next week is going to become better so don't forget the Task Week is running which is a great way to fly and improve your cross country performance.
Posted by Doug Hilton at 19:48