In a normal world, this week we would be running the Booker Red Kite Regionals at Wycombe Air Park, but with life as it is, we are running the Chiltern Challenge Cup at Chiltern Park, a 7 day comp with Distance Handicapped Tasks and regionals rules, although it is not a rated comp.

On Saturday 11th July we got off to a good start with a task of 198km, a couple of airfield landouts with aerotow retrieves and the first three places going to Jim White, Denis Campbell and John Otty.

Sunday was an amazing day with 6,000ft cloudbase in parts and light winds and the task was 322km, as always routed past airstrips to allow for safe landouts if necessary. The podium places shuffled a bit: Jim White, John Otty and Denis Campbell. Special mention for David Hamilton, flying his first comp, who managed 221km, having sensibly decided to skip the last turnpoint at Marlborough.

Monday and Tuesday were scrubs. Wednesday looked unpromising until mid afternoon when the grid launched on a task of 102km. It was a valiant effort - Denis did 52km before turning on his engine, Nils and Jim landed at Abingdon, and John helpfully flew over them before firing up his engine. Everyone else landed back. The result was Denis, Jim and John, but sadly no points because no-one passed the magic Y. There really should be marks for effort! Plenty of people enjoyed the day on tracking from the comfort of their own home though. 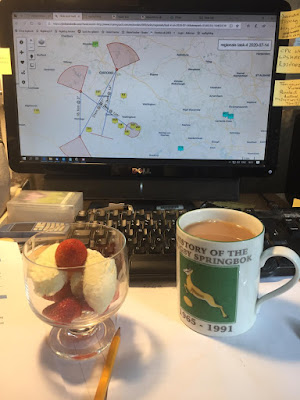 On Thursday the task was 152km around Lasham, Membury and Oxford. The sky looked good from the ground but it was plainly not so good on track. The winner was John, followed by Jim and then Denis. A handful of pilots had extra adventures - Ashley landed at a short strip near Kingsclere and was retrieved by road, Martin (a guest from Halton) landed at Membury and got a tow back from the Jones brothers, Nils landed at Bourne Park and was brought home by John in GH, and David picked a mammoth stubble field and was fetched by Richard in the Pawnee (any excuse).


The detailed results are here: https://www.soaringspot.com/en_gb/booker2020/results

Meanwhile at Booker - we resumed flying at WAP last Friday with 9 training flights, and another 9 on Saturday. The new method of operation worked very well with great joint working with power traffic.
Posted by Jane at 08:33