A great start to March 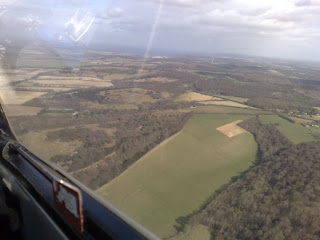 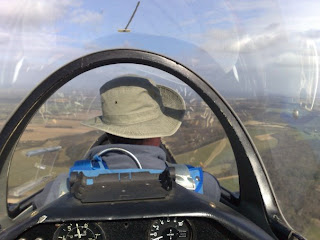 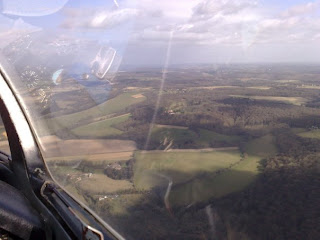 Convinced by Jim White that his seaweed was now properly calibrated and that today WOULD be a good ridge day I arrived at the airfield early to rig and fly. Everybody else seems to have had a lie in as I was the only person in the trailerpark. Nonetheless, after a quick visit to Asda to pick up on fettling supplies (sandpaper and vaseline for the Jantar, sweets for me) I returned to the clubhouse as more people arrived. Stuck around for Paul Clarke's lecture on local airspace (nice use of Google Maps - which he promises he'll send for me to load onto the website) until the gusts abated.
Eventually decided that rigging in gusty conditions wasn't the sensible thing to do...but there were two K-21s sitting at the launchpoint with no pupils to fly them. So, Messrs White and myself borrowed a K-21 and set about planning a trip to the ridge. In this case 'planning' comprised pointing the K-21 the right way, agreeing who would be to blame in the event of an accident (me, of course!) and who'd do which bit of flying. We agreed that I'd do the take-off, he'd do the landing and we'd haggle about the bit in between. The haggling was quite entertaining as we each tried to claim less and less ridge soaring experience than each other.
We came off tow at 1,800' (thanks Heggy) and found that the ridge was working even at that height. Great stuff. Jim took control and decided that this was too easy, so airbraked down to 1,400' and demonstrated his ridge soaring skills for a while. We swapped around every so often and then decided to push South of the motorway. Pushed down to the Watlngton/Nettlebed area and then turned North again. Able to use a mix of ridge and thermal lift to push back North and back up to 1,600' Decision time....head back to the field ? I thought it a bit marginal (remembering it'd be my name in the P1 box) so we kept working the lift down to 1,200' (don't ask!). During this time a couple of other gliders passed by (P10 and D52 ?) but they didn't really help in marking the lift.
The wind was now more Westerly than NorthWesterly (possibly even with a bit of South in it) and had decayed a little too. Just what you don't need. Oh, the sun disappeared at this point too (so no chance of thermals to save us either). Fortunately a small Westerly facing ridge was working sufficiently to be able to do a series of figures-8's back to a sensible height. Then it was straight back to Booker to apologise for hogging the glider for so long (better than ending up in a field though). A great flight, lots of fun, where was everybody else?
Posted by Gary N at 14:27