Shobdon in the sunshine 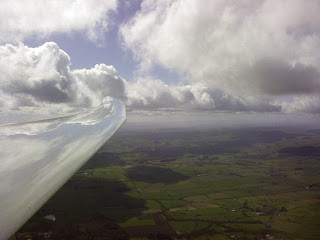 Despite rain and roadblocks we made it to Shobdon where as usual we have been made welcome by the members of Herefordshire Gliding Club and the other airfield users. Saturday was a day for exploring the excellent cafes of Leominster but Sunday was completely different. By the time Heggie had set his clock to BST and arrived with LH to tow for us we were rigged and ready to go. Andrew and Dave R did a quick sortie in Andrew's new toy, a Duo Discus T, then Jane took over as First Officer and they headed for Wales (which wasn't working), Ludlow and Long Mynd. DR took Graham, John B and Rolf for checks in 315 and then John flew 318. Glyn also took G1 to Presteigne and back. Cloudbase was around 4500ft with max 6kts average.

Monday was less exciting but we had some very pleasant local soaring with base at 3800ft and 3kt climbs. Andrew and Jane went to Ludlow twice, Glyn did Ludlow/Presteigne, Dave showed Graham how to roll on a heading, Rolf had a flight in 318 and then went to Talgarth with Heggie in LH while John had over an hour in 318. In the evening we went to the Radnorshire Arms in Presteigne where Andrew was presented with a birthday cake for his nth birthday. 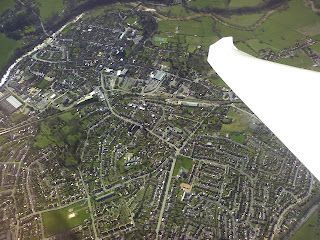