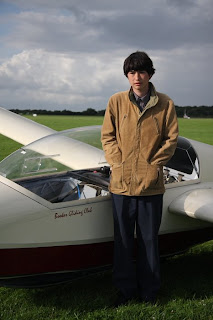 Some private owners and a number of club pilots came out to play yesterday 14.8.08. Mike Gardener soared for a couple of hours in the junior preparing for his 50km attempt and Henry Ross did a couple of hours in GBF dusting off the cobwebs from his lay off. Conditions were excellent from 10.00-16.30 with 4-5kt thermals, 3000ft + cloud base, winds 10kts @ 240. There were a few showers about all of which missed us until about 17.00 when we had a light sprinkling after which the wind dropped to 4-5kts and the sky opened up, just perfect for a first solo.

James Stanley lives in and while on a visit to his grandparents in 06 he spent a month or so almost every day at the club and became an unofficial cadet. James now aged 16 returned this summer and went solo much to the delight of his grandfather and father both whom are pilots and were on hand. Grandfather was on the field and gave father in a running commentary by phone while he monitored the weather via the BAFC website. Needless to say James is planning to continue the family tradition and become a professional pilot – well done James.