While we wait for the rain to pass, here's the latest from Booker in Aboyne. Thursday produced a fairly windy south westerly, and an unpromising looking sky. But Booker was not deterred, the following all reached around 9000ft or so before hitting the upper cloud: Dave B and Leon in 315, Mike C and Emily in ECZ, John 607, Steve JDV, Bob 279 and William MH. Denis 370 declined the opportunity having breakfasted on porridge with Drambuie served up by his hotel. The rest of the team leaned into the wind waiting for the landings, occasionally falling over when the rotor shifted and the wind on the airfield suddenly dropped.

In the evening almost everyone met at the Huntly Arms in Aboyne for a surprisingly good meal organised by Leon, who is staying there. The Cambus O'May contingent then went back to their cocktail bar while the others dispersed to their various abodes.

Today may well turn out good later on, if the wind doesn't pick up too much.

And here's a picture of the afternoon tea earlier in the week, hosted by William, Bob and Jane at their house Clearfield. 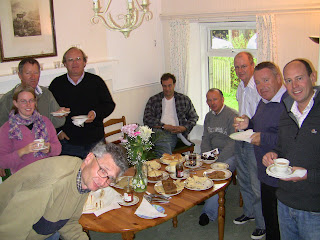