As we rigged yesterday under a threatening sky the sceptics laughed. But complete faith in Nils' forecasting eventually paid off. ( Though I must admit the occasional doubt)

The pressure went up and some ragged cumulus started to form, driven by the brisk 20 knot north westerly breeze.

I launched at 13.50 and soon reached the 3000ft cloudbase. Setting off to the northwest wasnt easy in the weak broken climbs as no sooner had you begun than you were back again. Eventually I broke free and on the Oxford plain things improved. A large shower area around Oxford was the biggest obstacle and after a low point from crossing a blue gap near Enstone I was finally up and away.

Base was now 4000ft and a superb street led westwards to Gloucester. Here the base was up to 5000ft and the street drew me onwards over Ross on Wye and towards the Black Mountains. It was so tempting to carry on. I'd joked with Denis in the morning about it being a good day for St David's Head in Pembrokeshire and believe it or not it was. The street carried on as far as the eye could see. But it was now 17.08 and I had not brought my toothbrush! I'd promised myself that I would turn at 17.00 so I turned abeam Abergavenny, 151 km out, for a really easy ride back to Booker arriving back at 18.38. Maybe I should have carried on, it looked really good and if you strained your ears you could just pick out the harmonious sound of the Tredegar mail voice choir; 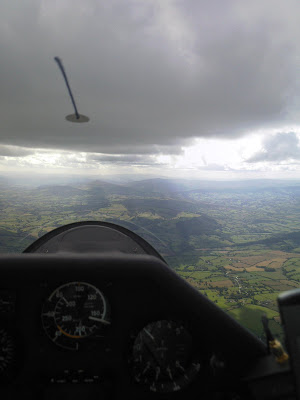