Farewell with a rainbow

Finally it has stopped raining and given us three days of gliding, though today a slight shower produced a good rainbow. 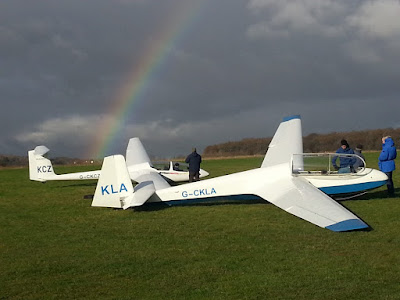 Today was also Mike Richardson's last day in the tug before his impending move to pastures new in Welshpool. Mike joined Booker in 1990 after learning to fly at Wolds GC while he lived in Hull. As well as gliding, he has contributed hugely to the club as a Full Cat instructor and a tug pilot, in fact he spent 3 years working full time as an instructor. He also provided the bus webcam and supplied the club's branded clothing.


One particular memory is the day he completed his first 300k, Yate-Worcester. Here he is having a post-flight drink, hiding behind Nick Hoare, along with Roland Wales (crew) and someone else who had also done the task.

We wish Mike all the best in his new home.

I do not recognise the pub

Red Baron as was