Friday's visit from the Press

Yesterday we entertained the Financial Times - or at least one of their journalists and a photographer, the plan being to give them enough information for an article about gliding in the FT magazine. Having scrubbed Wednesday, we watched the weather with some anxiety, and in fact the morning was awful, but the time passed quickly with a briefing and an introduction to Denis's Ventus 2cxt, which impressed them greatly. 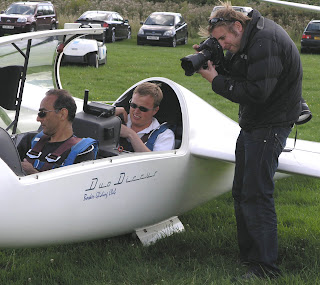 Then off to the Duo and a launch at 1520 for a jaunt round Buckingham-Chieveley. Meanwhile back at Booker we were treated to 3 beat ups by the Spitfire before it set off for Oxford. There was no time for aerobatics for the journalist because of the late start to the soaring, but at least he had a good introduction to the concept of flying without an engine.

An interesting day, let's hope it raises the profile of gliding in the wider world.
Posted by Jane at 21:35