Team Hilton on Day 5 of the Juniors

Day 5 eventually turned out to be the last contest day of the 2009 Junior Nationals and saw the Duo of Mike Collet and Will Ellis pair fly to great effect again securing 2nd and 3rd place respectively for the day and which resulted in overall first place for Will and 2nd for Mike - congratulations to the pair of them, a great result. 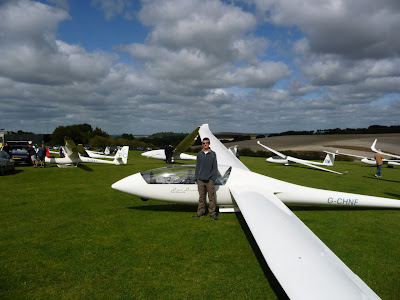 The other Duo being the club's Duo Discus being flown by Booker cadet Will Hilton with his dad in the back. The task was a 264k polygon to Bicester, Cambridge, Rushen, Winslow and back to Dunstable on a day with the wind being around 20kts at flying height. After launching WIll made a good start and followed a good street into the strong wind to Bicester. The leg to Cambridge cycled quite a bit and he encountered one or two lowish spots. The strong winds took their toll with over 30 of the competitors landing out at various places. 315 made it to Waterbeach where it added to the tally of landouts (along with 2 other competitors). 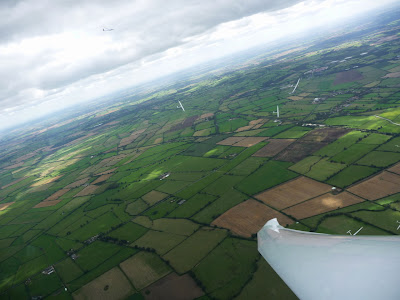 Will's first taste of landing out wasn't too bad and whilst the Army wouldn't allow us to aerotow out they did keep the NAAFI open for tea and cakes. The team at Dunstable organising the 2 seater flying alongside the Juniors (led by Mike Fox) made sure that retrieves went smoothly and even though 315 didn't have a crew formally organised a crew were dispatched and the retrieve made easy. 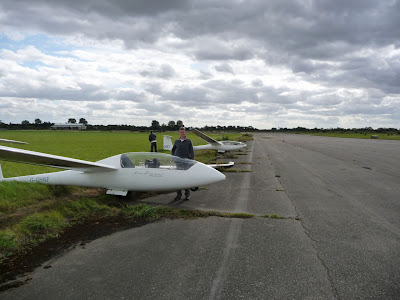 Whilst the 2009 Juniors are over, the two seater flying alongside it are a great opportunity for Booker cadets or early solo pilots to learn and see cross country flying in a competition environment and can be thoroghly recommended - one for the cadets to put in their diaries for 2010. Thanks should go to Jon Gatfield for ensuring the Duo was competition ready and organising pilots and cadets to fly over the week.
Posted by Jon G at 20:58