No report yesterday, sitting in the sun reflecting on the day's flying - and waiting for William to land - seemed infinitely preferable to turning on a pc. Tuesday was a bit too breezy for flying, so the merry band sought alternative entertainment. One party went down the mine, specifically the NCB museum near Abergavenny, reportedly an excellent day out. Party 2 drove round to the foot of Hay Bluff and decided that it would be foolhardy to attempt the ascent in view of the howling gale whipping around the top. The Youth Wing (and those with aspirations) went canoeing. And they all came back, although it was in doubt at one point when Richard discovered he hadn't mastered the Eskimo Roll. Yesterday offered a bit of everything, wave and ridge and thermal, sometimes all at the same time. The early birds got into the wave and had fun exploring the system, too much fun to spend time taking pics. Jim says he got to 8653ft amsl. The rest became more acquainted with the Black Mountain ridges, and did some thermalling amidst spectacular scenery. No airborne pics, but here are a few of the gang on the ground. 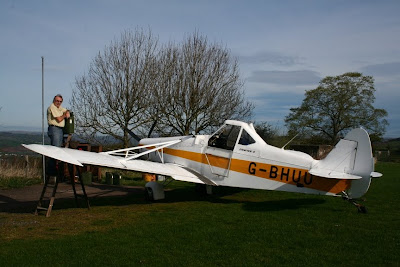 UU getting ready for the day 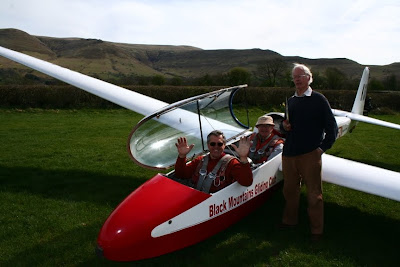 A pair of Richards and the local K13 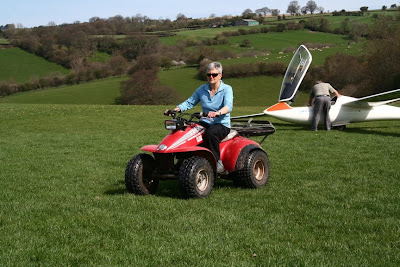 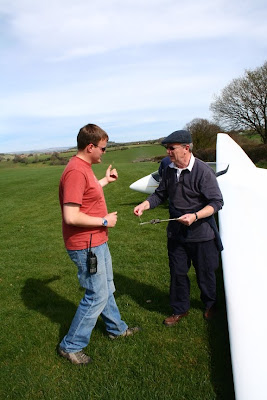 William giving Mike a few tips on his guitar technique
Posted by Jane at 09:55