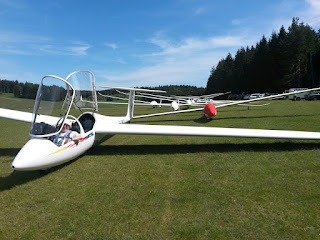 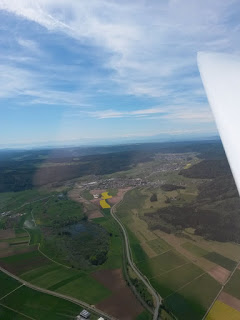 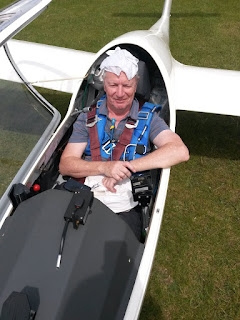 Another interesting day forecast - starting blue with cumulus later in the day with an approaching cold front and a risk of thunderstorms and showers. With this in mind a modest 140k task was set. The K21 was kept busy with training flights but with a reluctance to be the first off in the blue, John with V66 pulled off line not to retire but to push over to the winch where he was fired off and then had no problems soaring.
Denis set off with 370 and after flying the task then set off further into the Black Forest area and got up towards Baden Baden before heading home. Richard and Paul set off in the Duo initially to fly the task but decided to extend beyond the set task and flew NE out towards Ulm before headind NW (around the Stuttgart zone) towards Baden Baden the south towards Lake Konstanz and home for 260k. Along the way they encountered some extremely strong lift under developing storms and only stopped climbing when they got to 120kts.
The day didn't finish until around 19:30 when everyone set off for schnitzel and well earned beers.