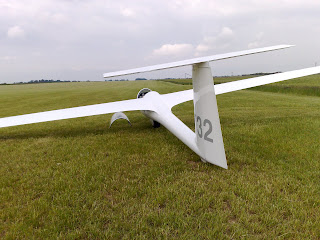 Went to Booker this morning for Jim White's x-c lecture and didn't actually intend to go x-c because of the complete mass of confusion/disagreement of forecasts from the various sources. Metcheck suggested an 18kt wind and yet the synoptic charts showed few isobars over the Country. Surely one of them was wrong ? RASP meanwhile predicted broken thermals, decaying away by 14:00 and plenty of rain rolling in from Kent and developing over the whole South-East. Only one thing to do under those circumstances.....look out the window! So, after the lecture we stepped outside and....bl**dy hell!...the sky looked awesome. What on earth where we doing on the ground still? Anyway off to the trailer park to rig (several of the folks on the task week had sensibly rigged before the briefing). Down to Asda to buy some emergency supplies (I don't thermal well on an empty stomach). Returned in time to learn that the club task was BOB-MAR-OXF-ENS-BOO (198Km).....or something similar.

Launched into a good looking sky, Cu building and growing nicely, top cover staying well to the East. Several other launched around the same time, so all signs were good. Set up for a start at BOB accompanied by Libelle 7Q and JDV nearby. 918, 949, 607, 971 and others had started shortly before. Messed the start up, so restarted a few minutes later and everybody had disappeared! Just how does that work? Anyway, set off on track and ended up at 800' just near the edge of Benson's ATZ. A low scrape so soon ? This gliding really is filled with highs and lows of a physical and emotional nature. Anyway, a 2.6kt climb was found and stuck with until 2800'. Made it to Marlborough and the sky on the next leg looked great. Jim in Z12 caught up and I followed him for a while as he headed North. Pondered going a bit further left to work some Cu but figured I could take a more direct track following Jim across a bit of a blue gap (note to self - don't be silly, follow the energy, not other gliders). Ended up scrabbling around a bit at 2200' assuming Jim had done much better. He hadn't. Anyway, made it to Oxford East (surprising how far North it is when you can see the sky decaying ahead) and elected to head home. Home wasn't as close as I'd like when at 2200' so topped up in a 3.6kt climb to 3300' and hot footed it to Thame Airfield. The sky was looking really dead by now and none of the hotspots were working. Played around in a couple of turns at 'not very high' with a pair of Red Kites before deciding that they were just playing 'bait the big white bird'. Levelled the wings, lowered the gear and touched down on the freshly prepared airstrip. Great field! The gliding club wasn't operating today but a tractor still quickly appeared to tow me back to the launch point and another member ran the wing when Booker tug 'MM' arrived to tow me home (thanks chaps).

Turns out that others had found it challenging too. Phil Cuming in 971 landed out at Draycott Farm after turning Marlborough. Steve Williams dropped into Thame shortly after I was towed out. Not sure how everybody else did but there's flights now appearing on the BGA Ladder (http://www.bgaladder.co.uk/Enquiry.asp). Spoke to a couple of p[ower pilots once back at Booker. They were helping with the BAFC Navex and spot landing competition. Turns out that we were doing a bigger task in gliders than they were in their Pipers! Still, each to their own.

Overall, nice day out but far too much like hard work but it was a very good landout field!
Posted by Gary N at 22:27