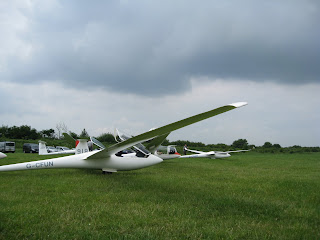 It's that time again. Summer has finally arrived, well almost. The grid formed, coffee'd, exchanged war stories, launched, landed and de-rig'd. Never mind it will be better tomorrow, hopefully.
For the rest of us the day proved a busy mix of trial lessons, courses, training and member flying. Cloudbase started at 2200 lifted to 2900 throughout the morning and finally ended the day high enough for some aerobatic competition between Alun and Gary (all figures optimistically stated as QNH). Visibility was the real problem early on particularly around cloudbase in our crowded airspace. Not much Mode S would do about that methinks. Stick to the Mark 1 Eyeball.
Posted by Mike R at 08:42