Awoke to another clear sky but some worrying cloud to the north west that made it less obvious where to go for the wave. 315 was first off followed by KCZ before anyone else had launched and wave was contacted at around 3,000' by Loch Kinord.

Others having heard what was happening then started to follow but a short burst of rain broke up the wave and had a lot of gliders scrabbling around low down before a wave system re-established itself and gave good climbs along the Dee Valley towards Braemar.

To the North and West there was extensive cloud cover but this didn't stop climbs to around 11,000' - around 13:00 the gaps started to close up and most people started down, again this was associated with more rain that came in from the northwest. 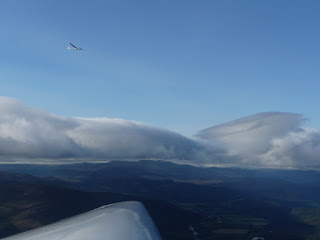 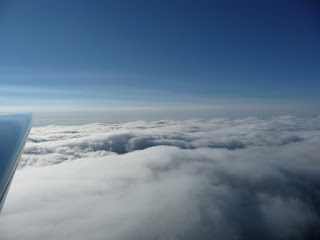 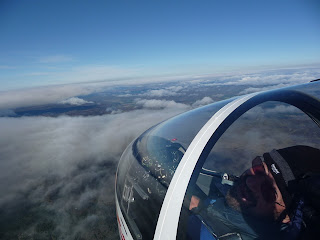 It brightened up late afternoon with a strong (20kt) wind at around 300' but virtually calm conditions on the ground.

Every landing is special and a piper was laid on to recognise the arrival of 315.

And in case anyone is wondering - the food is great too!
Posted by Doug Hilton at 22:53