THE day of the Year? 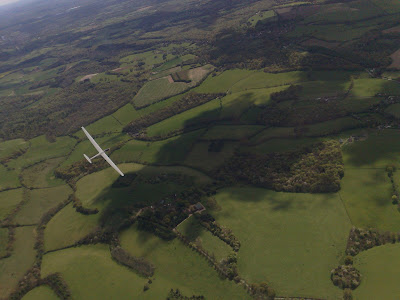 Jim and Dave-C's early morning email comment about today having great potential certainly turned out to be correct. Several declared and completed 500k's plus lots of other bimbling around to be had. Visibility was excellent and cloudbase went up to around 6000' in parts. Pity the ladder is out of action for a few days because it'll be really interesting to see what flights were achieved in such fantastic conditions. I did a 'local soaring' flight in K-21 KCZ of BOB-DID-BIC-BOO in a leisurely 1 1/2 hours, accompanied by G-DDXX/580 flown by Ben who'd originally planned a 300k task but had electrical problems. Even Gerry went cross-country in one of the Juniors, achieving BOO-DID-BOO and then did it again I think.

Everybody completed their tasks today so we finished off with a quiet drink at The Pad watching the balloons making the most of the now calmer conditions. Then suddenly an interloper arrived in the form of Lasham-based DG100T G-RYPE/E6. Apparently the 'T' part of a DG1000 only works when the batteries are charged! Anyway, they joined us in the bar (drinking orange juices!) until their rescuer, in the form of Bob Bickers flying Rallye tug G-BSFF arrived. 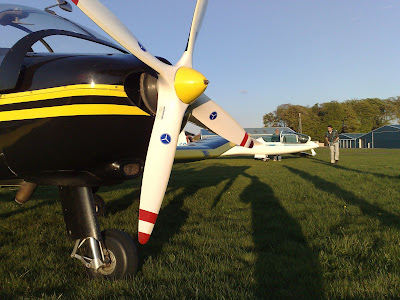