More in hope and with a glider pilot's optimism I arrived at the airfield with a 300k in mind. Corby South-Bullington and home.

There was a lot of cirrus about and once again lovely cu under the TMA but it looked very blue and murky towards the West.

It was obviously great weather for a Bronze course, on which 5 members were getting used to the Junior and Pegasus, field landings and managing Bronze legs, but not the sort of weather to be pushing off cross country.

Around 11.30 cu started to appear to the South of the airfield and then a little later to the West, perhaps it would be a good day after all.

I decided to keep to my original task and launched along with 246 Brian. The climbs seemed reliable and the track to the North seemed full of good looking cumulus so I started around 12.16. Whilst the vis wasn't exactly great it was enough to pick a path along a cu strewn track.

Passing Aylesbury I could hear a group of 4 gliders at Bicester planning the task Bullington-Hus.Bos. So that would keep me informed of the Southern half of my task. I couldn't see it but it was blue at Bicester by then. Although I could see that to the South it looked blue. I hoped this would change by the time I reached that part of the task. Little did I know!!!.

At little Horwood the sky ahead turned blue but the cu were still in abundance from Northampton on so I decided to continue. In the blue it was rather like post sea breeze with rather weak broken thermals. Never mind the sky ahead still looked full of promise. At that point Brian said he was calling it a day and giving up the task.

As I glid North the good looking cu kept disappearing from 'before my very eyes' and a slight tinge of doubt crept into my mind. Keep to the towns and it will be OK I told myself.

Meanwhile I could heard the Bicester group discussing tactics and sharing info on where the thermals were and strength. A group in the blue is always better.

At last just short of Corby a cloud stayed and worked. Round the turn and now what?

It looked grim into sun and poor vis. Back along the edge of Kettering which just gave bubbles and then into wind which was a reasonably fresh Westerly... a little village between Kettering and Pitsford grew larger as I descended then sure enough pushed a bubble off enough for me to turn in. I stuck with this until nearly 4000ft although I never made any sense out of it and couldn't stay in the core for more than a couple of turns before having to make major adjustment.

Pic showing Pitsford Res. and th poor vis. (Where would you go?) 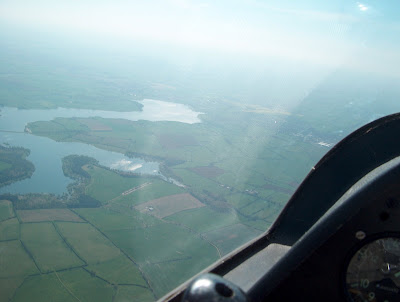 by the time I was approaching the M1 my height was beginning to get worrying and fields were on my mind but the large white storage warehouses alongside the M1 had rescued me on several occassions in the past so it was worth a try. After a lot of searching eventually another broken but strong climb carried me aloft again.

On to Towcester another broken climb. Now I could hear the Bicester group discussing giving up at Bicester as they took a climb near Didcot. And talking about the great looking cu to the west. Which I had been aware of for a while, but what use are cu 50 miles away.

As I glid past Sivereston I thought "Well at least I'm now able to get to Bicester myself". Then it was as if someone had drawn a curtain. The vis improved, it felt warmer and a good strong climb took me to 4000 no trouble at all. At Bicester whilst climbing I watched the Bicester group finishing and landing.

I decided that, with an obviously different airmass, it was worth seeing how much further I dared go without risking a landout. Gliding towards Oxford North (trying to make sure I could use it when putting the task on the ladder (as an undeclared task) it looked as though the cu were steadily increasing from the West.

Across Oxford towards Cowley and a cracking climb to 4000+ ... next point Didcot... At Didcot the moment of truth. Looked at my watch. Discretion took over "Go home don't be silly".

So that's what I did

Interestingly the cu reached High Wycombe and were still there whist I was shopping at 19.00hours.

Perhaps it would have been on after all.
Posted by Dave C at 21:34