Scheduled to take place on Saturday 11th April, Graham Saw organised the annual aerobatics competiton to take advantage of the Easter period. The weather didn't play ball, so the event was postponed until the following day...whereupon it was then postponed until the day after as the clag refused to lift and the cloud remained resolutely near to the ground. So, we actuslly ended up flying it on Monday 13th. Just as well it was a Bank Holiday really.

Graham persuaded Phil Atley, a BAeA Aerobatics judge with experience of judging both power and gliding, to be this year's Chief Judge. Phil spent several days at Booker patiently waiting for the weather to improve - 10/10 for perseverence. For the competitors this was a great opportunity to be scored and critiqued by a top judge.

The photo below show's Phil taking his Judging role very seriously - even critiquing Graham's pre-flight briefing with Will. 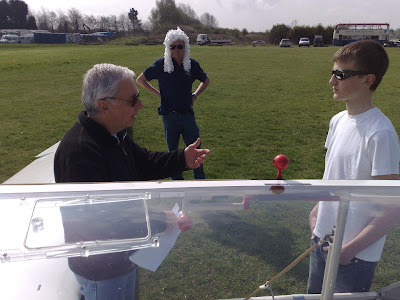 The day was slow to start but by 12:00 it was clear that it we were going to have great aerobatics weather and it looked rather decent for cross-country flying too. We ended up doing 14 aerobatics sorties, interspersed with cross-country tasks, trial flights, training and type conversions too. All good fun.

The aerobatics were flown mainly in K-21 KCZ with one pilot electing to fly in a K-13. Special good effort award goes to Jon Gatfield who went off on a cross-country task in his ASW27 (and then did a second task I think as the first one was too easy). He then flew the aerobatics sequence upon arrival back from doing a cross-country flight, being talked through the sequence over the radio. Cudos!

Details of the Easter Egg Competition will appear in the next newsletter but the prize winners were:

Will's place as winner is all the more impressive considering that he's 15 (yes, he did have a 'safety' pilot with him) and he's never practiced glider aerobatics before (althouhg rumour has it that he's quite adept at aerobatics in a Chipmunk).
So, another fun day with lots of variety.

Graham did the prize giving session on The Pad's balcony, which allowed us the opportunity to relax over a beer with the sun setting in the background. A great finish to a fantastic day - if you weren't there - what did you do today? 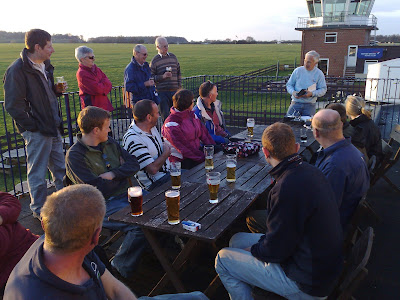