A Xcday at the weekend.

The forecast had said the front wouldn't clear until midday. Typically the forecast is hardly ever correct. Even so it probably mean't a lot of pilots didn't make the effort to be there today, which was a shame as it turned out to be rather good even if the wind did make life difficult at times.

By 11.00 ish. when I arrived on the field Tim Scot and Bob Sinden were rigged and Tim was going to do an AAT which I believe Bob felt would be a good idea. I'd fancied an O/R to Ludlow but was talked out of it by Alan Johnston who arrived shortly after me and felt a Corby Bullington was better. I convinced him we should do it the other way round and so that was our task for the day.

Jim White and Dennis then arrived and had a double shuffle in mind to Blandford Forum and the back and out to the West again.

After scrabbling to get high enough to start Alan and I did get going around 11.50 and it proved to be an interesting day with a Westerly wind around 17knots at flying heights. The highest I climbed was 5500asl around Bicester and the strongest thermals was a good 5knots. Picture below is looking towards Booker from Bicester. 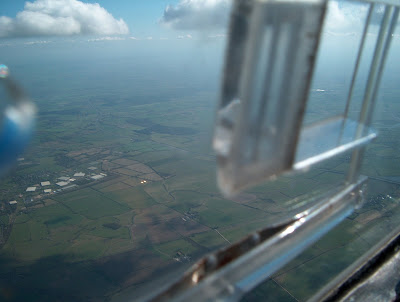 This next picture is looking South from the same place. The A34 running away along the right hand side. Notice how poor the vis into sun is. (Never mind the string I was looking through the view finder at the time) 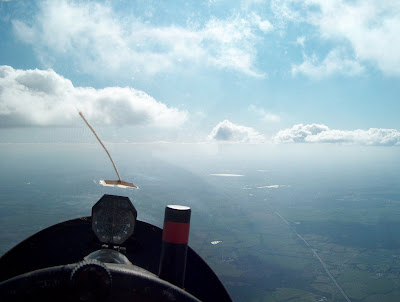 The last picture is the way home from Bullington. 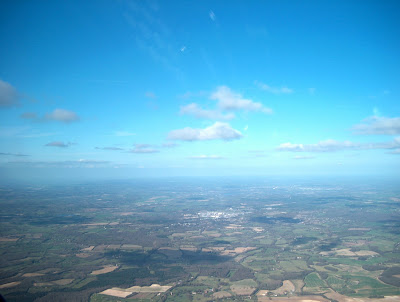 Hope these give a little idea of what it was like for all those that didn't make it today. Let us hope that their are many more such days.
Posted by Dave C at 19:50