Monday not quite as forecast

Jim says: An interesting day to fly.
There was a lot of interest, certainly, and a big grid (part of it below), also about 15kts of cold northerly. 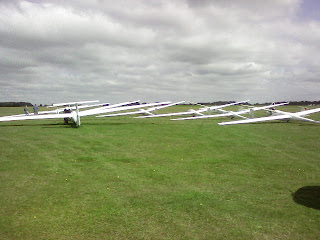 But the sky looked promising and eventually those at the front launched and the rest followed. Some fell foul of the wave but others managed to get established and get round a task, though not the one set.
Jim's report: There was quite a lot of cloud over developing at the 3000ft level to start with which was difficult to use with the stiff N'ly and wave too. Later it did organise a bit and we had a very good run up to CAL then down to NEW but to the N for the run back to BUC it had gone 8/8 in large swathes and I chickened out. Because of the cloud max temps were only 17C so cloudbase never went above 4100amsl but wind did drop as predicted.
Posted by Jane at 19:24