Another good forecast with cumulus to around 2,400 metres going blue later in the day and a northerly airflow.

With this in mind the plan was for the K21 with David Humphreys to lead the DuoDiscus with Barry Michael south to Chabre and then east to Sisteron before doing their own things. As a plan this is fine but it always proves difficult to lead from behind but was generally resolved by the K21 announcing what it intended to do and setting off only to have the Duo scream past it.

Initial climbs were good to cloud base at around 7,000ft but having flown the ridge at Charbe for a while and setting off further south to the ridge at Lure, Geoff in the Duo made the comment to look out for wave which as if by magic gave climbs above the cloud base to 11,000ft. 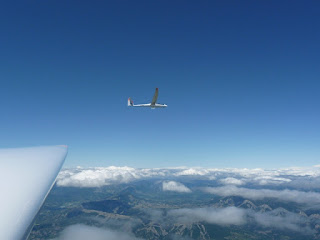 Around Sisteron the two gliders parted company and the Duo headed north to have a look at Pic du Bure whilst the K21 headed back to Serres via Gap and the Crete des Selles.

Later in the day after it had become a lot bluer Simon McCracken had a trip in the K2, trying and eventually finding lift in the wave - the flight was finally brought to an airbraked end so that everyone could get to the restaurant for a well deserved beer and a meal.