The morning mist took a while to clear so one party set off to explore the Linn of Dee up past Braemar, where they saw salmon battling through the torrent. Meanwhile back at the airfield, by lunchtime we had a clear blue sky and T shirt temperatures. John P. Henry and David H all had check flights to get a look at the scenery and the circuit. There was a strong inversion, so no soaring, but reportedly very pretty views. Here's ECZ's final launch: 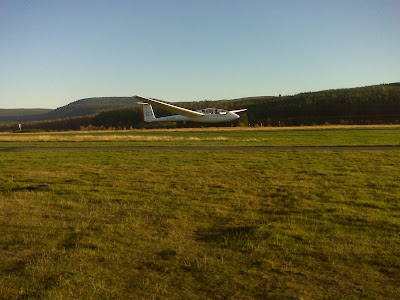 As the sun dropped, so did the temperature, and the mist came up from the river as if the tide was coming in. Most people went to the Boat in Aboyne for dinner, where the fish and chips and the steak pie are particularly good. Then back via the Co-op for Mackies ice cream and chocolate to be consumed back at Birkellun with some of Denis's whisky. The helicopter entertainment failed despite Henry's best efforts.
Posted by Jane at 09:45