Serres Expedition 2011 - Back to Blighty

Well its back to a bit of reality after the very successful Booker Club Expedition to Serres. I am very pleased to update you all that John Herman is back at the airfield at Serres with his wife Christine and enjoying a few days R&R in the sunshine before he comes back to England. If I know him he will probably be off fishing again - whats on the menu for supper tonight John - poached trout?

315, KCZ and 580 all returned to the UK on Sunday, a 1200km XC. 315 had a low scrape with a puncture on the M25 but climbed away for a safe return, KCZ landed out about 50km short of Calais and had to finish the trip on a low loader. 580 would have won the day for speed, but picked up some penalty points for a motorway lane bust. All 3 gliders are safely back at Booker and ready to fly.

Back at Booker over the last couple of weeks things have not stood still, there have been first solos for Matt Hocker (who only recently had a trial lesson, liked it so much he bought an intensive course and has now joined the club - welcome Matt), and a first solo for Booker Cadet Peter Richards. Adrian Hegner has also re-soloed after a longish layoff from gliding in 318 - its good to have him back gliding again as he has been a really long standing club member! Sally Longstaff converted to 318 and Booker Cadet Will Hilton has exercised the privileges of his recently acquired BI rating. Congratulations to them and to anyone else who has achieved anything that I have not found out about
There is a Vintage Gliding Club Weekend at Booker this weekend as well as some better weather so put it in your diaries to be here, lots to see and do. 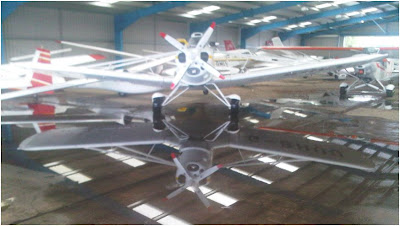 Mirror formation after the thunderstorms today
Posted by Doug Hilton at 18:55