This is why we put wings on tyres

It was wet last night. Very wet. William (LC) had a marathon retrieve from his stubble field, derigging at record speed as lightning flashed around, and the first spots of rain were falling as they pulled out of the field. After that the only storm in the country tracked its way up over Booker, flooding the hangar. 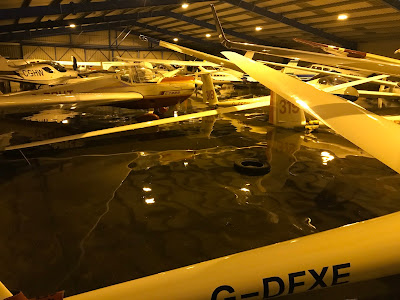 Richard called in on his way home from the Grouse and Ale and discovered that his nice waterproof shoes weren't proof against filling up from the top. It's a lesson in why we put wings on tyres in the hangar though. William had further tribulations getting home after dropping off his trailer, roads blocked everywhere with debris and water.

Today was a scrub, all that water has to go somewhere, evaporating back up into 8/8 cloud cover. We hope for better things tomorrow.