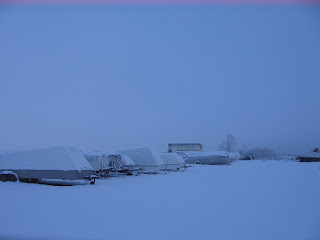 Merry Christmas!!
(Photo courtesy of Shelagh of the Antarctic)
Posted by Mike C at 09:28 No comments:

The day ended with an impressive display of helicopter flying in the clubhouse. The gathered crowd were speechless as Jane flew Glyn's helicopter around for what seemed like an eternity with no incidents or accidents.

The two helicopter pilots then bonded over discussions about 2.4ghz spectrums and spare undercarriages. 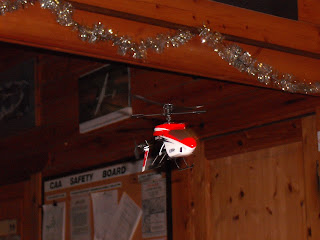 Another gloriously sunny day, we are about to open the hangar and go flying. Come and join us, the views over the snowy Chilterns are amazing.
Posted by Jane at 09:22 No comments:

Two days of glorious flying off the snow this weekend with club members turning out and keeping current. Here are a couple more photos of the snow at Booker on Saturday.
Lots of club members out with cameras so hopefully a few more will appear on the web site. 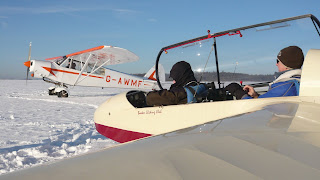 After half an hour or so defrosting the hangar doors, Will and Doug Hilton took first flight of the day with Mike Collett tugging in MF. 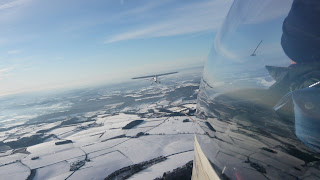 William P kindly took me for a flight in the back of K13 EBZ. On tow towards the Hambleden valley behind Cub MF.

Booker in the snow 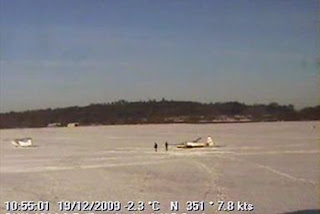 Following this morning's lecture on thermalling (probably wrong sort of thermals for this time of year), we've been having fun doing aerotows from the snowy airfield. Cold but great fun! This image captured from the BAFC webcam.
Posted by Gary N at 11:47 No comments: 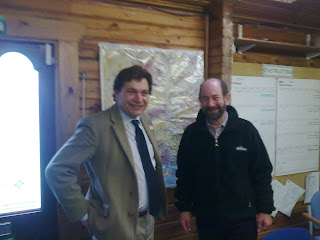 On Friday the Club received a visit from Steve Rodrick, Chief Officer for the Chilterns Conservation Board . He was interested in how the Club operated and its achievments. He also talked to Geoff about the aims and objectives of the CCB.
Steve last flew in a T21 many years ago. He said he will come back to do some flying with us in the near future.
Posted by Denis Campbell at 21:54 No comments:

Head in the clouds? 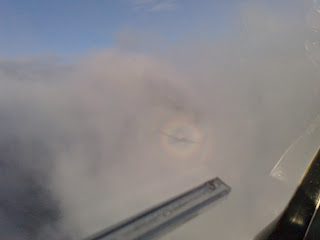 Well above them actually. Today we were fortunate to see some lovely flying conditions, with nice gaps in the clouds for those who wanted to fly higher. There's something very special about flying along and seeing the glider's shadow projected onto the side of a cloud. Even more unusual was the rainbow that encircled the shadow. Very picturesque and just about captured in this photo.
Posted by Gary N at 17:37 No comments: 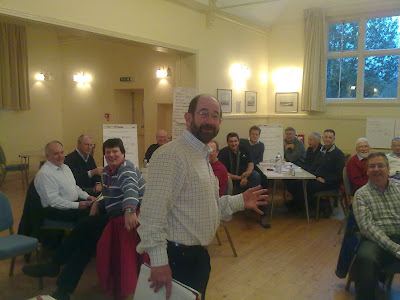 If any of you noticed that a few of us were missing yesterday, be of good cheer! We had hoped the weather would be bad but it turned out better than expected.
Nevertheless, the committee were joined yesterday by a group of enthusiastic members, to work on the club's strategic plans for 2010 to 2014 and beyond. We invited a cross section of proactive members, from early solo to long standing veterans, on a fairly arbitrary basis, to get good representation. The response was terrific. Please accept our apologies if you would have liked to participate in such an event but were not invited. We did chose somewhat at random and it is no reflection on those whom we were unable to invite, simply because of the venue's necessarily limited capacity for numbers and the manageability of the group size for an effective workshop.

We had twenty four members in total who gave up a whole day to attend the workshop which was held at Goring Heath Parish Hall. There was a little bit of wingeing about the early start prior to the event but everyone got there and got really engaged in the topic.
It was an intense day and I am sure everyone felt exhausted at the end of it, but we made good progress in plotting scenarios, and identifying issues and opportunities for us to work on.

Rumours continue to abound about the likely future of the airfield, most of which are untrue, even when seeming to come from authoritive sources. The committee, and those who have been assisting with the club's affairs, were able to give clarity on the club's situation.

We left the meeting with some very positive statements;

There is uncertainty about how the airfield may look in the future and the extent to which the council may or may not develop it. But we will emerge stonger, whatever happens, either with a stronger tenure on a much reduced airfield development than that muted or be handsomely compensated for being willing to move our operation to an alternative site.

Either way we believe we will be better off and that we have something to shoot for that is very exciting. Plotting our activities and focus certainly occupied a winter's day when we did not miss too much in the way of flying. We were spurred on by the knowledge that we have a great club with some very talented people who are capable of tackling whatever lies ahead.

In the immediate future, we are looking for someone in the club who may be a professional PR person, or someone who aspires to such, to help us with a communications programme. If anyone fits the bill we'd really like to talk to you.

Posted by Geoff Tabbner at 18:19 No comments: 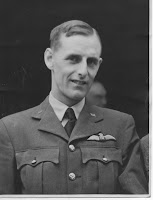 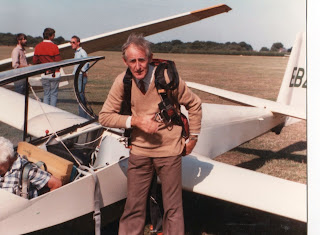 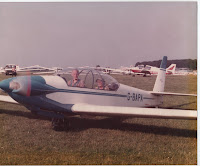 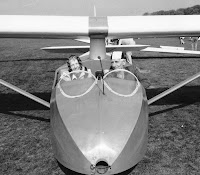 Sadly Dudley Steynor our oldest member passed away peacefully in his sleep early on Friday morning surrounded by his family. He had celebrated his centenary in October. It was a grand affair, with an air display, steam engine, a Lagonda, and other vintage cars.
A more detailed tribute to Dudley will follow. Our thoughts are with his family and friends.
Posted by Denis Campbell at 12:08 No comments: 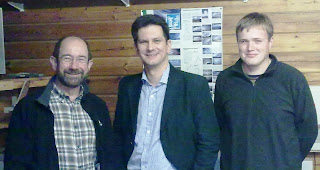 Following on from the visit of Paul Goodwin MP we were visited on Wednesday by Steve Baker the Conservative Prospective Candidate for Wycombe. Steve had a busy day. He spent the morning with the Wycombe Air Park Action Group, then visited Tim Orchard at AAA, before joining us for tea. He talked with Geoff, Mike and I on a variety of issues and made some very interesting points about the future. Steve is an experienced skydiver and you can see him at http://www.stevebaker.info/tag/skydiving/
If thats not scary enough you can take a look at Steve's views on money in the Cobden Center
http://www.cobdencentre.org/
The weather precluded any flying so we look forward to Steve's return when it improves.
Posted by Denis Campbell at 15:21 No comments: