A grand day out

A good turnout considering the  number of members away eating bratwurst and sauerkraut on what was an interesting day with the promise of good thermals but the worry of intermittent top cover. John Otty raced round 371 Km with Wayne flying over 300 km. 370 "landed out" at Corby so then went sightseeing to Skegness. Not exactly sure where the rest went but great to get some good soaring.

Posted by Denis Campbell at 22:58 No comments:

The fault with the launchpoint webcam was traced to the Wireless Access Point which has now been replaced. Data reception from 24 looks better than before so hopefully 06/35 will work as well. The timer which switches the camera off overnight has also been replaced.


Short video from a sunny Saturday, low res but you get the idea. Enjoy.

Thursday and Friday at Klippeneck

The forecast for Thursday seemed promising and Richard set a number of tasks of varying lengths, the longest being a 300k out and return.

It turned out not quite as hoped and although Richard made it round there were some visits to fields. Nils was efficiently relaunched from another gliding club, Zeljko and Jane made do with fields.


Friday began with a bit of fixing, Richard very kindly re-attaching the u/c door on 118. 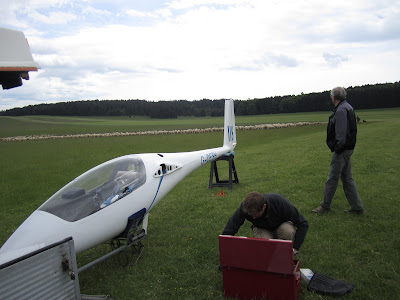 The shepherd brought his flock over for a look.

The weather became quite unstable with showers of rain and hail, but with good soaring to be had in between. Some people went off to explore local towns and relax with coffee and cake, meanwhile Henry JTY and John and David 315 soared late into a beautiful sunny evening, landing around 1930 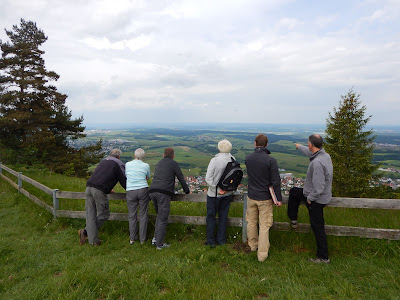 The day was completed by an expedition to a nearby bowling alley, where the teams were helped out by the younger members of the trip - Nils and Sabina's Benjamin and Simon and Marnie's Billie and Charlie. Hakan pulle off a commendable 3rd place, Zeljko shone in 2nd, and Bob's sustained effort won him 1st place. Nick Newton was Master of Ceremonies and provided the prizes.

Being on top of a large ridge, the weather here can be quite interesting. Here are a couple of pics from the start of the expedition......


But at least it cleans the bugs off - and look at the shine on that canopy!

The forecast today was enough to get the entire fleet rigged and gridded on runway 22.


Nils set a 100k triangle, Richard set Ulm out and return and then went in completely the opposite direction and visited France via the Black Forest. Those new to the site made exploratory forays in various directions, Rolf and Dave C-B dropped in on other airfields but were soon back on site. The views were stunning - makes a change from the Chilterns.


Dinner parties followed the pattern for the day and set off in different directions, though rumour has it that they mostly went to a pizzeria in a nearby town. An early night is indicated as the forecast for tomorrow is for big tasks.

David drew the short straw on Friday morning and was the first to fly. Following an interesting tow through a cloud, he managed to perform all 11 figures in the correct order (which he himself declared as an achievement...!) for a reasonably good score.

The cloud then rolled in, and no more flights were flown that day.

Saturday was a much better day and flying started early. Graham made a good job of his Advanced class Unknown sequence. The rest of the Sports class flew their Known 1 sequences, and the two beginners flew their single sequence. Flying continued into the evening with the Sports class flying a truncated Known 2 sequence from around 3000ft. David fell out of the top of his chandelle and suffered what can politely be described as brain fade for the rest of his sequence....

Final results, Graham 3rd in class, David 5th in class. Charles Baker from Lasham was 3rd in the Intermediate class.

The first day of the competition started to a gorgeous early morning, but the low cloud quickly slid in to delay the start. At midday, with a cloud base of 2800ft, a decision was made to fly split sequences for the Unlimited/Advanced/Intermediate known programs.
The cloud base rose throughout the afternoon, and all of the free programs were flown in one go.
Graham made a nice job of his first flight, but a strengthening wind caught him out a little and he finished low and downwind. After the two sequences he is in 2nd place in the advanced class with 74.37%, just behind George Rizk on 74.81%.
David spent the day working as a judges scribe. Hard work but interesting!
Posted by Jane at 04:39 No comments:

Booker pilots at the Aeros Championships

Today is the start of the British Glider Aerobatics Championship at Saltby airfield in Lincolnshire. Booker is represented by Graham Saw at Advanced level and David Humphreys at Sports level.
Yesterday's practice day saw the pilots dodging rain showers and threading their way through cloud. Graham spent the day finely polishing his sequences and David had some last minute instruction from George Rizk.
Today sees Graham flying his Known 1 sequence.
Details of the contest, including results, at: British Glider Aerobatics Championships 2015