Much activity in the clubhouse today with TWO excellent lectures - the morning one from William Parker on "Human factors", and the afternoon slot on "Mountain soaring" delivered by Geoff Tabbner, whose enthusiasm for the subject was enjoyed by the full-to-bursting lecture room audience. 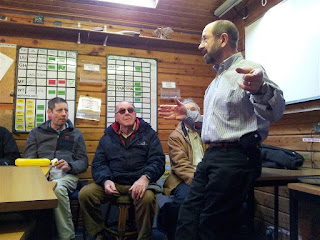 Meanwhile, outside, Richard was kept busy on a windswept field, including completing George's BI training - well done, George!  A few members took to the sky finding some strong lift (and sink!) for this time of year.

Some of the weekday regulars turned up for a bit of winter sun and fresh air.  There was even some rigging and quite a bit of flying as 318 was coaxed out of its trailer to cope with demand.  Thanks to some selective airfield use we managed to find a good dry takeoff run despite the overnight rain.  There were thermals, though none of us quite managed to make them work. A good time was had by all. 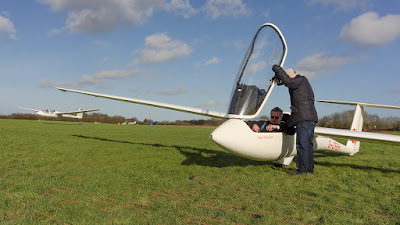 A frosty sunny Saturday with no wind - and not much mud - a pleasant change from December. There was certainly plenty going on. In the clubhouse Jim was giving a lecture on Met for x-c with an enhanced set of visual aids. This year he created a cloud in a bottle, maybe next year he'll be doing rabbits out of hats. In the afternoon, Tim gave a briefing on how to set Handicapped Distance Tasks, so more people can set tasks on good x-c days.

Meanwhile a bunch of instructors were being put through their paces for their 3 and 5 year checks. Richard and Doug worked hard all day going up round and down.

Also under instruction was Alun, being trained by Graham for his advanced Aerobatic Instruction rating.


George seemed pretty impressed with his first flight in his new toy.


Flying went on until shortly before official night, after which we all retired to the clubhouse for a warm up!

Chairman leads the way from the back (seat that is) 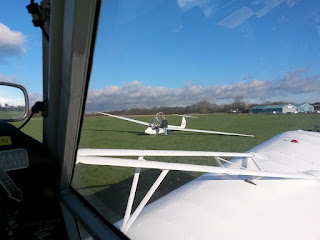 The grass is always greener...

It is still possible to find areas of the field which are amazingly mud free with long lush grass, as the lucky few on Sunday found out. It was even soarable and remarkably mild for January, although looking at the forecast it may not be for much longer. Which only goes to prove that you need to be "in it to win it" as they say.