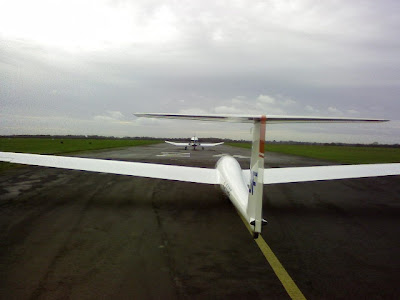 A handful of people saw that there were alternatives to shopping and we took advantage of the tower being closed to launch from hard Runway 24, which was pleasantly smooth compared to the usual grass. A few aeros in the calm air and then a right hand circuit, just to make the most of being on the 'forbidden' side of the airfield. The occasional power traffic slotted in nicely without the need for ATC. There was also some model flying, including slope soarers and a jet. A very relaxing and enjoyable day.
Posted by Jane at 17:15 No comments:

For some dramatic recent photos of wave clouds (lenticulars) over Yorkshire, take a look at http://www.bbc.co.uk/news/uk-england-leeds-16302606.


The text refers to wave clouds as 'rare' and only occurring near large mountains like the Himalayas, we glider pilots of course know better. Though not as impressive as in these pics, wave occurs at Booker more often than you would think, especially in the winter when there are no pesky thermals to mess it up.
Posted by Jane at 14:00 No comments:

Following on from Jim and Mike's adventure on Friday, FZA took off to clear sky but was cut off from the airfield by a snow shower that appeared from nowhere! Rather than try to fly through the snow and sleet, height was maintained in the lift on the edge of the shower and a good field selected in plenty of time and a safe field landing made. The retrieve was made in near darkness as HNK had to be rigged to make room for FZA! 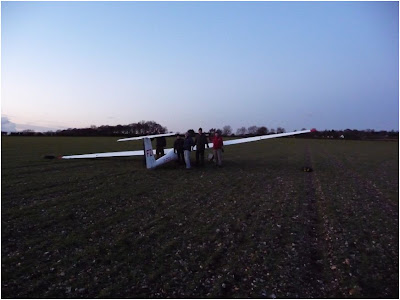 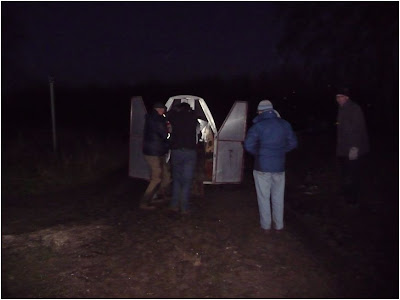 The pilots were nestled all snug in their beds,
While visions of final glides danced in their heads.
And Sheilagh in her ‘kerchief, and Sue in her cap,
Had just settled their brains for a long winter’s nap.

When out on the launch point there arose such a clatter,
I sprang from the clubhouse to see what was the matter.
Away to the window I flew like a flash,
Tore open the shutters and threw up the sash.

The wind so strong blowing north side of west,
Gave Jim the idea, fly to the ridge at its best.
When, what to my wondering eyes should appear,
But the Pawneee and K21 to the rear.

With a little old driver, so lively and steady,
I knew in a moment it must be St Heggy.
More rapid than eagles his launches so stout,
And he whistled, and shouted, and called “launch All Out!”

Out on the ridge with good beats west and east,
Maintaining their height, 1400 feet at least.
Come says Jim this all very good but now let us press on,
Crossing Risborough a doddle and then on to Halton.

The joint decision is made and it’s time for best glide,
Setting course to the north what a wonderful ride.
The snow on Coombe Hill so fluffy and swell,
With height running out it’s not going well.

Children looked up low over the roof tiles of Wendover,
As a hearty cry went out – I have control the flight it is over.
The landing was smooth in the Aylsebury clay,
A soft muddy landing for Mike and his sleigh.

Elves duly arrived and carried it out all covered in mud,
An epic rig by the FOGers to much cursing sweat and blood.
The ground so crisp and icy that Crockett used his head,
He bashed into the tailplane – concussion, phew not dead!

Back at the apron where rumours’ abound,
Sat flying school planes tied firm to the ground.
The Duchess looked drained, things right on the verge,
But outcomes look up following a merge.

Sunday looms glorious so FZA with Rob has to fly,
When they meet with an obstacle, cloud showers in the sky.
Return to the airfield no longer an option it’s time to land out,
Field selection was good – winter wheat and not Sprout!

"Now Cooling! now, Phelps! now, Parker and Herman!
On, Williams! On, Hilary! On Davey and Richardson!
To the trailer park! to the top of the wall!
Now retrieve away! retrieve away! Retrieve away all!"

So off to Rockwell End they flew,
With the trailer full of HNK! and trestles too.
The light getting dim, cross field they plodded
The mud thick and sticky their shoes they were clodded.

With glider derigged all hearty and hale,
It was time to head back to the old Grouse and Ale.
But on arriving back at the clubhouse all frosty and cold,
Was an old man dressed in red standingever so bold.

He spoke not a word, but went straight to his work,
And filled all the stockings, then turned with a jerk.
And laying his finger aside of his nose,
And giving a nod, up the chimney he rose!

He sprang to his sleigh, to his team gave a guffaw,
And away they all flew down the line of 24.
But I heard him exclaim, ‘noise abatement to the right’,
"Happy Christmas to all, and to all a good-night!"

Unable to help ourselves, Mike and I set off for the ridge on Friday once the cloud lifted high enough. Local ridge seemed to work OK to about 1300 so, despite the lack of a decent vario we started off toward Halton.

What could possibly go wrong? I didn't do well.... 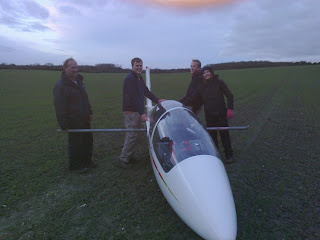 Funny thing gliding...30 minutes flying, 3 hours retrieve, 3 hours cleaning and rerigging. What else would one want to do at the weekend??
Massive thanks to Heggy, Sue, and the ever resourceful Will for coming out to get us, Richard, Sarah, Glyn, and Steve B for helping clean and rig, and Mike for not being cross!
Jim﻿
Posted by jimboffin at 11:42 No comments:

The list for Booker Gliding Club’s trip to the French Alps (Serres) next year will be going up on the notice board on Saturday the 17th December. The dates that are currently being planned for are the 9th – 23rd June. If you are interested please ensure you put your name on the list. This will again be an essentially two seater trip so if you are considering bringing your own glider please talk to Mike Collett, Doug Hilton and Geoff Tabbner. Due to the high-expected interest there will be a deposit of £150, which will be taken from your account. Any questions please feel free to ask.

Just in case you’re wondering why we go have a look at the following:

Also dates for your diaries the Bronze lectures which will be taking place on the following dates:

The first frost of winter...

....and a glorious sunny day, with plenty of action at Booker. The FOG briefing on ground handling and the arcane art of glider parking was followed by a practical session on splicing, the participants all did very well. As to flying, there were instructor checks, aerobatics, members flying, and a visitor from Weston on the Green escaping from heavy objects falling from the sky at his usual airfield. The weather was ideal for all levels of experience.

The end of the day saw an attempt on the record for the maximum number of people required to derig a K21. 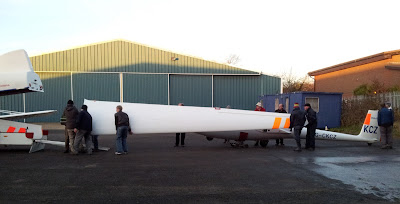 And then as we thawed out with hot tea in the clubhouse we were treated to a magnificent sunset. 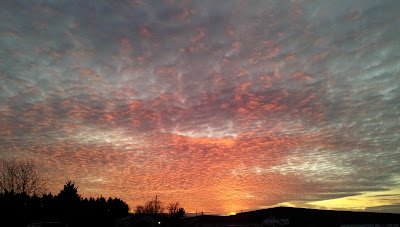