Some more pics of fun at Lleweni Parc

The members on the spring expedition to Wales had another fantastic ridge day with everyone here spending several hours beating up and down before showers brought an end to the day around 1730.

Here are a few pics:

A happy bunch of pilots 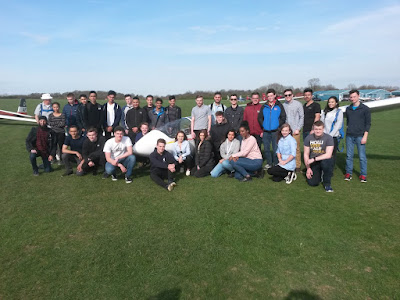 The smiling faces say it all. All the young students after they had flown. Several came up to me after their flights to say what a great time they had had and to thank the club and their instructors. My thanks to the instructors, tug pilots, cadets and office for making it all run so well
Posted by Doug Hilton at 20:49 1 comment: 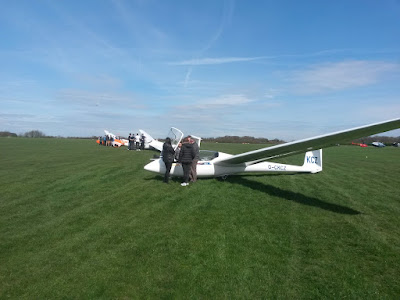 Booker hosted another BA/Air League sponsored work experience day today. 30 young students from around the Heathrow area are part of the scheme BA are running which includes seeing different aspects of jobs at BA, interviews, CV writing, team building and giving them a few life skills that school doesn't  (as well as an aviation experience). We flew all 32 who attended and and still had time for lunch.
Posted by Doug Hilton at 20:40 No comments:

Here are a few more pics of Wales from various angles


Here's what we did on our rest day last Wednesday:

And some local livestock:

Took a ride in the tug with Richard and two tug pilots in tow behind - Boris and Jim Rowland. Great views of Snowdonia, Morecombe Bay, Cumbria, even the Isle of Man in the far distance. Then the Flarm went berserk..... 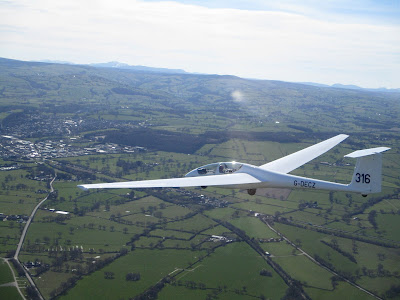 All change today, the wind was from the east and at first there was a lot of mist, but after a while the sky cleared and we started launching towards the ridge. There was no sign of the promised easterly wave, but there were thermals and the scenery looked great. Landing procedure was no longer 'roll to the end of the runway' as that would have meant a gentle canter down the slope on the second half with the possibility of continuing on down the grass to the stream, so we aimed to stop at the taxiway, referred to as the Cook Strait, halfway down. Seemed to work. Here are some random pics from the day.


There was a much more difficult version with just the one wheel, like a unicycle without a seat. Mostly it required people walking either side to keep the rider upright.

Just a couple more pics of Denbigh sights. T4 and LC flew out to the coast together after a spell swanning around just below 7000 feet close to the airfield. It was relatively easy to transition in to the wave by pushing out from the ridge, with the lift working over a large area. It was a great flight, but I should have landed 15 minutes earlier to avoid the edge of a large (massive) shower, won't do that again! 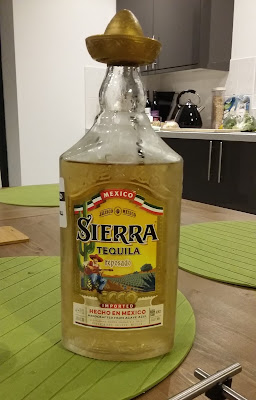 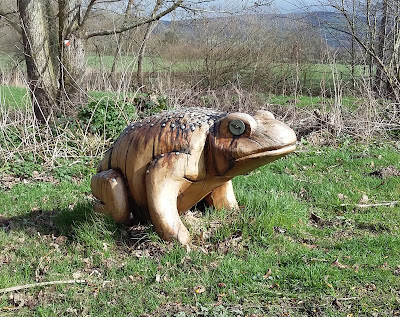 This morning started very wet indeed but by lunch time the bad stuff had passed and the fleet was rigged.

Everyone was soon batting up and down the ridge and climbing away in wave, with views of the seaside, iron age forts, the Jubilee tower and lots of lovely countryside, some of it quite wet. The field off the runway and peri track is also quite wet, so the rule about keeping off the grass has a lot to be said for it if you don't want to get covered in mud. All good fun though. And one happy person is Nik von Merveldt who finally completed his Bronze by demonstrating that he could get to the end of the runway on landing. It was also his first time ridge and wave flying, the grin when he landed was quite something.

Here are a few pics from Saturday and Sunday. It's a bit wet this morning but we hope for sunshine later.

Still blowing a gale, but Pete Wyld battled through wind and weather from Booker in the Robin, with the whole expedition lined up to watch his landing. After a pause for breath he launched Richard and Jim in 315, they promptly wafted up to 6000ft in wave. It was getting a bit late by then so we fuelled up the tug and went to our respective homes.

Booker Gliding Club's spring expedition to Wales has a different venue this year - Lleweni Parc near Denbigh. The weather so far has been a bit wet and windy but 315 had no sooner arrived than it was rigged and going up the wire for a look at the local sights, including the 30km Clwydian Ridge.