'This Saturday saw another batch of enthusiastic pilots go through the popular Aerobatics Course run by Graham Saw and Alun Jenkins. The tug pilots were ecstatic after twenty seven launches to 4000 feet. The courses are on the first Saturday of every month throughout the winter.

The enthusiasm for aerobatics ran on into Sunday with some more advanced figures being flown under Graham's critical eye.

Sunday also saw the first thermal soaring flight of 2010, this year's honours going to Craig Cairns who took Bob Davey along for 32 minutes of soaring in a K21.

Earlier in December we had a special occasion when Hilary Binner was persuaded to leave the warmth of the Booker office to take her first flight in a glider over the snowy Chilterns. The big grin when she landed said it all. 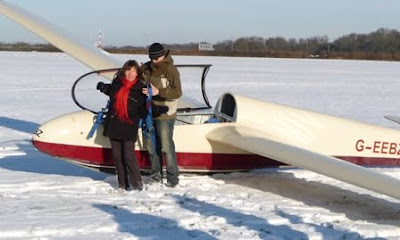