Saturday's sunny start and forecast of good soaring made the launch point the busiest so far this year with the first grid of 2011 being set up but the sky lacked any obvious cumulus. Modest tasks of around 100k were declared and launching for the xc pilots started around midday into a very blue sky. Climbs were available up to around 3,000' but with no obvious places to find lift there was no great rush to set off - however a few of the stalwarts felt that it was time to set off around 12:30 but calls were soon coming in of one or two low points.
One such pilot certainly exercised the ANO rule about no flying within 500' of vehicles, vessels or structures except for gliders flying on a ridge (but with the wind only showing 2/3kts from the south west that was unlikely) - he did however have his wheel down so was flying below that height for the purpose of takeoff or landing. 45 minutes of working marginal lift on Chinnor Ridge finally resulted in a climb to enable the task to continue - proves the point that you need to get up an fly and practice (a lesson we could all benefit from).
I'm only aware of 3 people completing the declared 100k task - apologies if there were more and well done those who stuck with it!
Being the first busy day of the year also highlighted how rusty some of us have become over the winter months - everyone who flew (and those that will do soon) should reflect on their standards of airmanship, lookout, entering and leaving thermals, circuits and approaches. If you have any doubt now is a great time for a check ride (or two).
The busy day led to over 60 launches and the launch point coped very well , big thanks to everyone who made it a success- roll on summer.
Sunday was quieter with highlights being the first flight in 314 by its new syndicate owners Simon and David (gentle reminder - 314 is now a privately owned glider so don't be tempted to jump in if you see it sitting at the launch point). 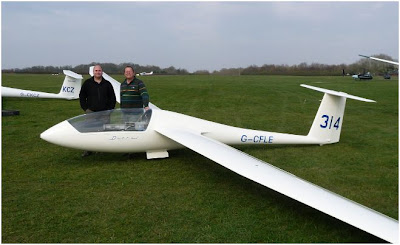 We also saw Richard Crockett being checked out to fly the Pawnee - brings to mind the old Chinese proverb "don't send a boy to do a man's job!" 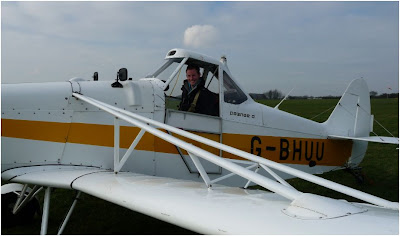 Lastly - don't forget to get your entry in for the Booker Rules 2011 Competition - see the link alongside.
Posted by Doug Hilton at 19:43