More wave flying today. Congratulations to Rob Kehr on a good solo flight in 318 climbing to 6,450. It doesn't sound very high, but this was about the best anyone did in the cloudy conditions. We launched early and had magnificent views towards Aberdeen with a gap up the Dee Valley and line of wave smoothed cumulus all the way from Aboyne out to Braemar.

The most notable feature today was the low launch heights needed to get into the wave, some pilots managing to get away with releasing at 1100 feet.

Everybody flew today and there were a number of flights over five hours. Cloud at many layers prevented any good climbs, but William Parker found an edge over Glen Tanar and then a few climbed to 8,000 ft or more. 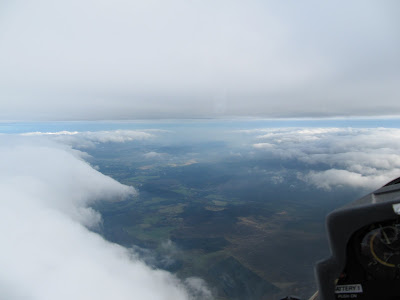 Great pic from Rob K that shows the East-West wave bar with a line of cumulus leading off towards Aberdeen. You can also see the layer of cloud at 6,000 feet that stopped many from getting any higher.
Despite the weaker climbs and lower cloudbase, Jane 118 still made it out to Braemar, but don't let J1M know.
We ended the day with some radio controlled rocketry, which entertained locals and visitors alike.
Posted by Bob S at 18:23

Good to see that the fun continues at Aboyne. Booker has also had a positive turn in the weather - yesterday and today both produced good soaring conditions and some weak wave to the giddy height of 3k. Several flights over an hour were made with some of the stronger thermals topping 4kts. Forecast for the weekend looks good.