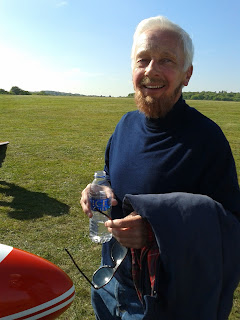 What a great day. First launch at 8 am Graham certainly didn't have a beard when he flew Richard Martyn's beautiful K6 behind the Pawnee. A few hours later he reappeared (having been to White Waltham) and had grown a splendid bush. He then made a few more flights in the K6 for the benefit of the film crew which was filming scenes for a programme we can't name until it's aired.

A blue day, with a strong inversion at 3000ft QFE. A few adventurous flights were made, but many elected to stay within the local area.

David Parker, a trainee from Dartmoor Gliding continued his training in the K21. He made a superb cuppa on the bus cooker. Thanks.