Winds 110/05, the threatened CuNims didn't appear and soaring in the blue from about midday.

John Klunder from Camphill enjoyed a local familiarisation flight with Andrew Monk before flying his newly acquired ASW 28 (C6). A quick Bicester out and return to make sure the systems were all operational. John was until recently the CFI at Camphill. 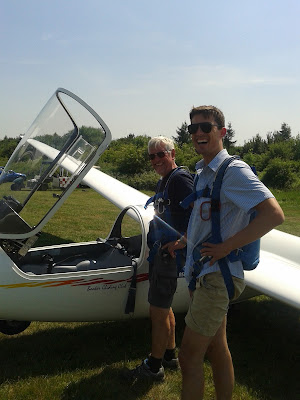 Captain Monk also taking the opportunity to show off his summer attire.

Peter Cross achieved his 2 hour soaring flight for the cross country endorsement - well done Peter. Alistair Gill flew for the first time since 2008, he soon got into the groove and demonstrated a near perfect landing. Alistair was a solo pilot at Parham before moving to London and working as a aircraft engineer at Heathrow.

Tim Scott vanished in his 29 returning with a flourish at around 5 pm.

Lima Hotel returned from Klippeneck having had a wonderful flight across Germany and France in near ideal conditions - big grins all around.

The evening group consisted of Brian and his son who both enjoyed a flight on a  lovely summer evening.

Another very pleasant day.
Posted by Don Puttock at 07:44