Launched just after midday in 208 and spent 40 minutes or so getting used to the glider again as it was my first flight since Aboyne in October. My pair flying partner, Calum in 314, was delayed launching due to changing wind conditions on the airfield. We started at 12:50 and flew to Broadway via Thame without any difficulty. Cloudbase was about 4200ft and thermals were regularly available and pretty reliable. Coming out of Broadway I was overconfident and charged out at 90kts. A few minutes later at 2000 I was regretting burning so much energy and we spent about 20 minutes scratching to the west of Banbury. Calum started to head home but I got into a stronger climb and decided to continue to Northampton South with Hannah in CH. The run to NOS was very easy and at one point I had 5.7kts average flying straight for about 2 minutes! Heaven. On the way I heard Calum land out at Souldern and I promised to retrieve him upon my return to Booker.

I landed at 17:00 for a speed of around 52kph (212km)! I need to try harder. I also actually really enjoyed my first solo retrieve to get Calum and 314 out of a field near Souldern (40 miles from Booker, near J10 of the M40) and was handsomely rewarded with a curry in High Wycombe later that evening.

Dusting off my thermalling skills over High Wycombe before starting BOB-BRO-NOS-BOB.
Waiting for Calum in a thermal at cloudbase somewhere between Thame and Broadway.  I was practising winding the speed up in order to launch out of the thermal rapidly.  You can see Calum in 314 fifteen hundred feet or so below.
Thermalling with Hannah in CH at the start of the very difficult leg from NOS to BOB.
I call this clip 'Four Horsemen of the Apocalypse'.  This was taken between Northampton and Thame when I was flying due south.  To the left, under the dark overcast sky is home, to right and ahead is some nice sunshine.  I carried on as far south as I could before turning left for Booker.  I only just made it home and was very pleased to make it around the task. 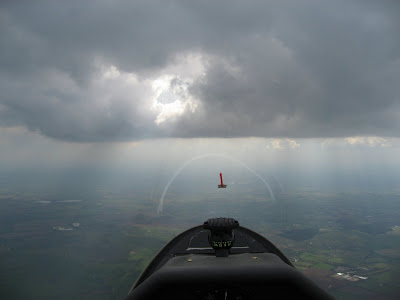 A really beautiful shot of the rays of sunlight shining through the gaps in the dark clouds. 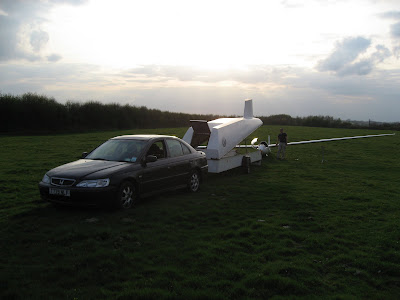 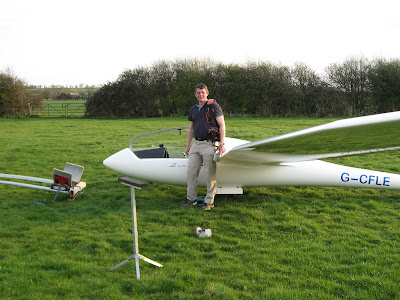 Calum safely down after his first ever field landing.  Congratulations on an excellent piece of field selection.  However, you should have checked if the gate was unlocked before landing! 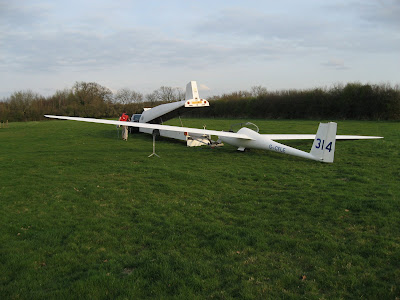 De-rigging 314 near Souldern
Overall, a really great day's flying, especially for the beginning of April.
Cheers, Jimbo :-]
Posted by Jimbo at 13:33