The sun and heat of last week have been replaced by snow and frost but flying continues with every possible day being used to the full. On Sunday BGC members clocked up 15 flights with a culmination of Mike and Graham taking the last launch and having a 1½ hour flight which took in Brecon and Hay on Wye thanks to good thermals and an increase in the breeze producing the right ingredients for flying the ridge at the end of the day.


Monday was overcast until midday but still 9 flights were achieved including Glen enjoying over 2 hours in his own glider and Rolf putting the Junior to good use with a 1½ hour flight.
Tuesday provided a brief window for 3 launches in the space of ½ hour with Jeremy having the opportunity of flying in the BMGC K21. With superb timing the gliders were de-rigged and in their trailers one minute before the rain arrived. In the afternoon the major achievement was a height gain of over a 1,000 feet by Lee, Glen, Vic and led by Jeremy up to the ridge returning safely after 3 ½ hours of strenuous activity.

On Wednesday the snow arrived plus wind and sleet, so a second visit to the “Big Pit” filled the day. 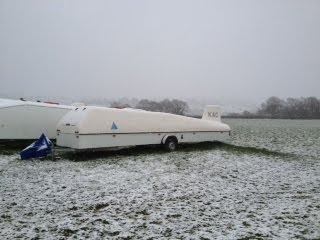 Excursions continued on Thursday thanks to Rolf organizing a visit to Talgarth Mill which in the past two years has been beautifully restored and is now milling the local grain, the adjoining café kept everybody happy with cake and coffee.
By the time we returned to the airfield Don (BMGC) was ready to fly the Pawnee launching on a snow covered airfield. A “test flight” with the local K13 provided encouragement to launch the K21 resulting in 4 flights culminating in Lee demonstrating his aerobatic skills. 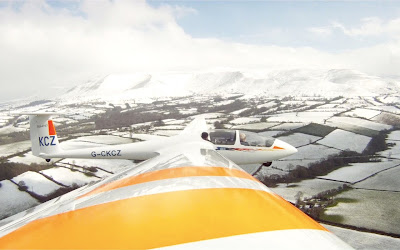 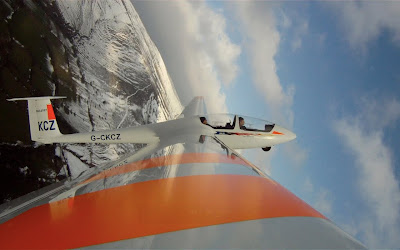 Graham Morfey
Posted by Jane at 22:07