The Blog has been a bit quiet of late with poor weather and the general media focus on the Queen's Diamond Jubilee celebrations which does seem to have been enjoyed by the nation as a whole.

2 days before the Diamond Jubilee celebrations started, The Air League held its annual reception in the presence of the Patron - His Royal Highness The Prince Philip Duke of Edinburgh (who incidentally has also been the Patron of the Air League for 60 years). The reception held at St James's Palace is an opportunity to recognise the success of the Air League Leading Edge members who have received flying bursary's or gliding scholarships and to present them with their certificates.

Booker Gliding Club was well represented with two of its cadets who were there to receive their certificates - Sam Gervais and Will Hilton who looked very smart and didn't go along in their normal 'gliding attire'. 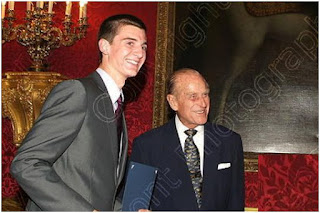 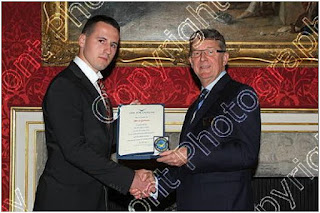 Sam Gervais receiving his certificate from Sir Brian Burridge, President of The Air League
Posted by Doug Hilton at 21:18

Well done Sam and Will - did the duke crack any jokes?