Monday the sky that greeted us was clear and sunny but with a lot of moisture in the air from the previous evening rain. The forecast suggested rain later in the day but the area to the east and south of Serres was OK.

As it turned out, the day was much better than forecast with cloud base rising to 10,000 allowing Simon McC and Geoff in the Duo to cover a lot of ground to Col de Cabre to the north, Pic du Bure then across onto the Parc Cours via Gap and home.

The K21 with Barry M also explored up to Col de Cabre across to Veynes and then went to Sisteron before returning via Crete des Selles. 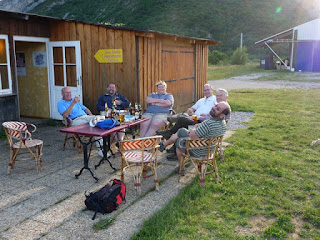 Beers were called for in the glorious setting sun before a substantial thunderstorm hit during dinner.