A good weeks flying (and trip to the seaside)

This last week has produced some excellent soaring for local training and cross country flights.

Conditions were good for 300's on Monday with J1M, 325 & 944 pilots doing tasks going south-north. It was probably the 'buggiest' day this year (not appreciated by J1M who lost a wiper around Corby). I acquired a rather nasty bug that accompanied me for about 50km before a particularly bad thermal entry finally dislodged it. 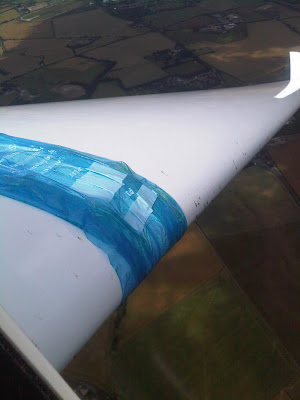 Nasty bug!
Thursday saw a more challenging day - not because the conditions were bad but to try and avoid all the airspace restrictions due to Fairford, parachute dropping and Red Arrows RAT's (oh and a minor rant from Mike C wondering where everyone was on such a good day! - good point Mike)

Dave C came up with a 375km task that avoided all the airspace issues and took advantage of the best of the weather (Booker Bridge, Fordingbridge, Axminster, Stockbridge, Booker) - a long way south and west.
315, A2, 944 and 987 (with Minigat) set off to the south west where the conditions rapidly improved and cloud base rose to 4,500 (eventually over 5,500 later in the day).
It was interesting (different?) flying along the second leg with the Dorset coastline to the south so close and the New Forrest underneath.
Conditions were clearly very good as there were several paragliders that needed avoiding at all heights.
Unfortunately Axminster was in a rather large blue hole and this resulted in Dave C landing out at Lyme Regis. A long retrieve but there are far worst places to spend an afternoon.
J1M declared and completed a very creditable 500km topping the club ladder for the day. 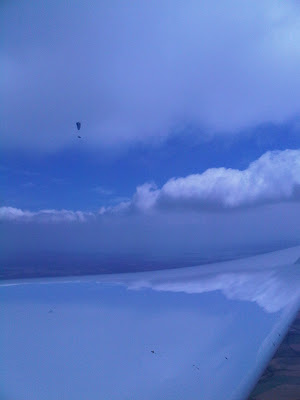 Paraglider around Blandford Forum at 4,500' 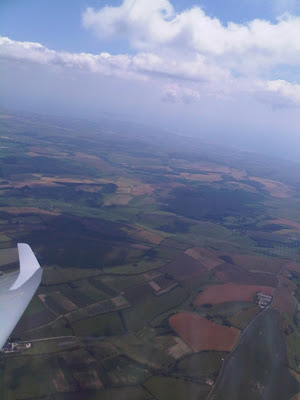 Chesil Beach and Portland Bill in the far distance.

The good conditions continued on Friday with more cross country flying going on - unfortunately I couldn't be there so not sure of all that went on but well done to all who flew (and the others not mentioned from earlier days in the week who achieved something new or just enjoyed the flying they did).

Don't forget to support the club at the GASP protest rally this afternoon- we don't want to loose the ability to do what we all enjoy doing.