Yesterday, 28th July 2011, the conditions looked good enough for another attempt at a 1 hour flight. To my surprise the K18 had been removed from its unwarranted position at the back of the hangar and was in the air with me next to fly.

In I popped, and off we took.

Pundits on the ground reported conditions weren't as good as they looked, with sink under the big clouds, and lift either in the blue or under the wisps.

Things didn't look great to begin with, there was plenty of bubbles but lots of strong sink under the 'obvious' clouds. As I worked back to High Wycombe I was getting lower and lower. At 1300ft I had to think fast or we would be landing very shortly: I have always noticed regular lift over the dump on the downwind leg, but its too broken to use when you are in the circuit. So this time I said, "Let's see if the lift is useable over 1000ft"... The vario moaned through 4 down sink but then it bubbled and the vario sighed, then gently beeped, and gently beeped some more. With heaps of concentration and flying as efficiently as possible the lithe K18 danced about the sky revealing the secrets of lift and slowly the beeps and lift got more frequent and we were back at 2000ft. The flight was back on!

I was in the 2000ft airspace, so it was time to look around for lift elsewhere. Over the town looked the best, and as I drew closer I could see 2 gliders circling in different circles. The sink was strong, but I took a deep breath and aimed for the higher glider at the back of the Cressix Estate, not the closer glider. Whoomp - beeep beepp BEEEPPPP!!!! What a fantastic thermal! The best of the flight, with 4 to 6 knots of lift. That was the first time I've seen the altimeter visibly winding up.

At 3000ft over the town, and with seagulls joining my thermal I let out a whoop of joy and gave the K18 a metaphorical pat. Now we had the height to explore the 4000ft airspace and make the flight last longer.

More than any flight so far, this was a fascinating exercise in figuring out where to find lift and I reckon the sky was doing the following:

The wonderful K18 with its powers of thermal divination had danced me into thermals often enough to stay up for 2 hours and 15 minutes... Really far beyond anything I expected and it got me back up from 1000ft over the dump one more time before eventually the large cloud over High Wycombe sent all of the local sky into sink and that was the end of the flight.

A thousand apologies to the previous pilot who waited patiently for the K18 to land, but he was gallant enough to help me pack the K18 in the hangar at the end of the day. 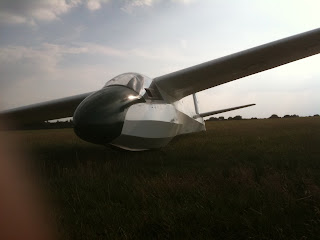