After a morning waiting for the conditions to improve and the occasional shower and low level cloud to pass through we started launching around 14:00.
Rolf was first up in the K21 and was one of the few to contact wave with a short period of good lift between Morven and Logie Coldstone before the wind dropped to nil and the convection broke up whatever was left of the wave. 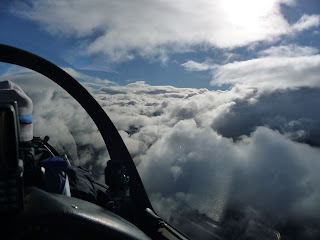 Most folk then ended up thermal soaring and at one point when several gliders had congregated in one thermal it felt quite like the start zone in a regionals.
The landing area became very busy for a period and all three runways were used as a large number of gliders fell out together but everyone behaved and mostly rolled to the end where willing ground crews moved them out of the way.

In the evening dinner was hosted to the capacity of Clearfield Cottage where a superb 5 course meal was enjoyed.