'Twas a tad breezy today and there was some discussion about whether to scrub in the 20 kt Southerly. It was a good job the decision was to go as the conditions were great with climbs of up to 9kts reported and a cloudbase over 5000' amsl. Will Hilton flew the Booker Duo today and did a splendid job, handling the flight pretty much from start to finish. 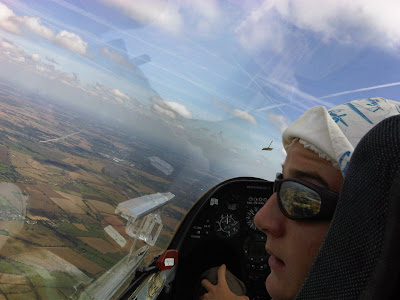 Will went North of track on the first leg and took a good first climb near Bedford, made the first turn near Cambridge up at cloudbase and had some nice runs along streets heading back to the final turn at Newport Pagnall. The final leg saw the Duo pushing well at 110kts back for another "good finish". Will flew the task at 78kph and would have come about 25th for the day!

In the competition itself the true grasping nature of Mike Collett was revealed to the world;-)
Having been a little mediocre in the motivation department he started to pay attention when it was made clear the sponsors of the competition, D3P media (go out and buy their product now! http://www.d3p.co.uk/) had put forward some fantastic prizes: yesterday's day winner prize was announced as an ipod touch and rumour has it Wii consoles are also in the prize kitty. Suitably motivated it looks like Mike has won day 2, with Will Ellis probably second for the day and first overall. It's amazing what a little motivation can do!
Posted by Jon G at 20:16

Well done to Mike. His handicapped speed of 120kph shows just how quickly he can fly his Libelle. If he makes a habit of achieving these speeds I think we'll need to look at amending the glider's handicap!