Tuesday 18th with no get me home

The day which should have been a good 500k day rapidly became 8/8ths so I went home for lunch, with a view to seeing how it went later.

By 13:00 the sky was opening up and looking more reliable so back to Booker. Tony had just rigged 114 and I suggested we try Market Harbourough-Bullington and if the day didn't get much better we could always cut it short.

A9, Glen was waiting to be launched as we pulled onto the grid and he said he'd have a go too.

Tony started first then me and then Glen. Passing Aylesbury the sky started to become more overcast with embeded cu and Tony said he was struggling near Mursley, when I arrived he was turning in something so I joined him eventually finding the core a terrific 1.2 knots. The sky seemed to be getting better so we pushed of to Milton Keynes and had a climb to cloudbase. A9 said he was having no fun at Aylesbury and was going home if he could get there.

We were going to try for Bicester straight away but as it was just soarable I suggested we turn Stony Stratford and then make for Bicester (ha ha). We both turned STS and then set off for the most acceptable looking clouds at Buckingham. We both had a climb which petered out at a height which just wasn't quite enough to reach Bicester. At that point A9 Glen said he was back at Booker and available for retrieve which was a relief as the little puffs that appeared on track didn't work at all. It was all over and I heard Tony land as I struggled to use the odd bubble which never developed and landed a few minutes later.

The field was huge with a road running across the middle of it. The aim was to stop just short of the road. Picture shows result. The farmer was friendly but didn't want any vehicles on it as it had just been drilled (sowed) with rape. Glad I got as close to the road as possible.

With engines we'd have both been home 3 hours earlier but then that's not gliding is it! 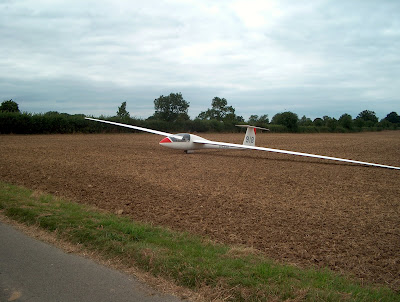 Well done for trying. It did look awful as I drove back to work!